Exploring Why E&P Stocks are on Sale

In a recent blog, we wrote about Commodities Undervalued vs Broad Market, the value of commodities and natural resource-related equities relative to financial assets has grown more and more depressed over the past decade. This disconnect is most pronounced in the energy sector. Investors have become convinced that the E&P “model” is broken, and that even energy companies with prime acreage positions in the best shale plays have become chronic value “destroyers”. Investors have lost faith in even the highest-quality management teams with decades of experience.

The chart below plots the historical relationship between price and PV-10 (a standardized measure of discounted cash flow) for an index of ten popular E&P companies. 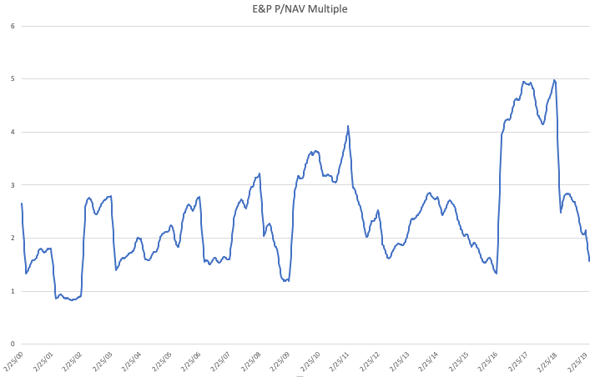 Although a company’s PV-10 value is heavily dependent on oil and natural gas prices, you can easily see that investors are paying a smaller and smaller premium for oil and gas reserves of the North American E&P industry. In fact, valuations are almost as low as during the last great bottom in oil prices back in 1999-2000.

If the North American E&P industry were indeed destroying value over time, then it would make sense for investors to ascribe less and less value to oil and gas assets. In an extremely good, widely-read piece that appeared in the January 2, 2019 edition of the Wall Street Journal entitled “Fracking’s Secret Problem—Oil Wells Aren’t Producing as Much as Forecast”, the authors claim that oil and gas companies operating in all the shale basins have been far too optimistic in projecting their well performance over the last four years. The authors singled out two Permian companies, Pioneer Natural Resources (PXD) and Parsley Energy (PE) as companies where well projections fell short of actual performance.

As we discuss extensively in the oil section of our newest commentary, we have undertaken an extensive drilling productivity study across the three main shale basins (Bakken, Eagle Ford, and Permian), and we have come up with a slightly different take on the Wall Street Journal article. Our research indicates that while there has indeed been a drop in well productivity compared with expectations, these disappointments are not universally distributed among E&P companies. Some companies continue to drill excellent wells while some do not. Also, we observed that much of the disappointment has taken place among privately-held E&P companies – the majority of which are most likely owned and managed by private equity firms.

We should point out that our models indicate both Pioneer and Parsley are drilling among the best wells in the United States today and that their wells are neither underperforming nor disappointing. Regardless, the “value destroying” thesis is obviously being applied to both stocks, and as a result, the discount to our net asset value calculations has now become huge in both names. As further proof of just how cheap these names have become, Anadarko Petroleum (a company with a large Permian position), has emerged as the object of a bidding war between Chevron and Occidental Petroleum.

This blog contains excerpts of our in-depth commentary “The Bell Has Been Rung”. If you are interested in this subject, we encourage you to download the full commentary here.