Investors Bearish Yet Energy Demand Has Never Been Stronger

“We have seen an extraordinary increase in global energy demand in 2018, growing at its fastest pace this decade.” Dr. Fatih Birol, Executive Director of the International Energy Agency (IEA)

“Together, China, the United States, and India accounted for nearly 70 of the rise in energy demand around the world.” IEA Press Release 3/26/2019

Our readers know we disagree with the prevailing view that global energy growth is slowing. Instead, we believe 2018’s strong energy consumption figure will be repeated over and over again in the coming decade. Based upon our research, all forms of energy consumption with the possible exception of coal will experience robust demand growth far exceeding consensus estimates.

Ten years ago, we put forth our demand thesis and concluded we would soon enter into “a golden age” of energy demand growth. Based upon what we like to call the “S-Curve,” we discussed how rising income levels in many emerging markets had reached important “tipping points,” where total energy consumption begins to accelerate materially. This observable phenomenon has occurred repeatedly in many emerging markets in the post-World War II period. The most famous example of the “S-Curve” is oil consumption in South Korea between 1980 and 1997. 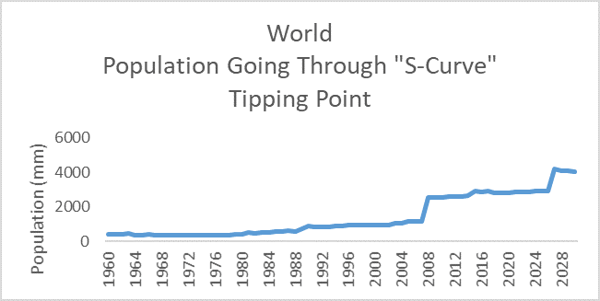 China passed its “tipping point” back in the early 2000s and has since been joined by Malaysia, Thailand, Indonesia, the Philippines, and Vietnam. And now, as we extensively wrote in our letters last year, India has joined this group as well. In just 20 years, the number of people going through their “S-Curve” period of intense commodity demand growth has jumped from 700 mm to over four billion. Never in history have so many people all gone through their “S-Curve Tipping Point” simultaneously. The result is that global demand for raw materials such as oil, natural gas, copper, and proteins will continue to surprise to the upside.

Want to keep reading?
Download our in-depth commentary, The Bell Has Been Rung.