Leigh Goehring on the Many Factors Sending Oil Prices Higher

Managing Partners Leigh Goehring and Adam Rozencwajg recently hosted a video conference call along with Stacy Havener, CEO and Founder of Havener Capital Partners. During the event, they discussed the outlook for different natural resources including oil and copper as well as factors affecting investors such as inflation. Here is Leigh discussing the current state of oil-related equities.

“Oil today is in the class of being an uninvestable asset. And if you just look at the way oil stocks are performing, they've gone up a lot. They've gone up about 120% off their bottoms that were reached back in the beginning part of April of last year. But as far as we can tell, there has been no real buying that has taken place in the oil names. This is hard to believe, but since they bought them back over a year ago, most of the upward pressure on oil stocks has come from short covering from both hedge funds and algorithmic traders who have been massively short the energy space over the last several years. Of course, it's that massive shorting which has made oil stocks such radical underperformers.

And just to give you a statistic to show you that this is indeed true. If you look at the E&P index which is embodied in the XOP ETF, the open interest in that ETF over the last year, since it bottomed back in April last year, is only up 15%. And usually what happens is that when true buying comes to the open interest, ETFs begin to expand. Now, you compare oil relative to copper, where there has been real buying and we'll talk about copper in a minute. For example, the various copper ETFs, their open interest in the copper stock ETFs are up 700% over the last year. Now how'd you like that? 700% versus 15%.

There's no buying taking place with long only fund managers in the oil space. However, that is going to change because the underlying fundamentals in the oil market are excellent. And there's several issues in the oil market today that very, very few people understand. In fact, I would say that next year, we're going to enter a situation in global oil markets where we have never ever been before in the 160 years of history of oil, since it was discovered back in Oil Creek, Pennsylvania 1850 by Colonel Drake. 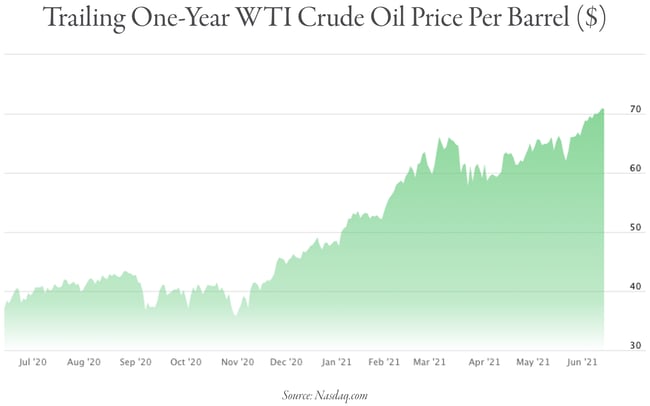 The global oil market has always been what I would call a structural surplus. There's always been more supply than there has been demand. Even back in the two energy crisis in the 1970s, the '73 Arab oil embargo and the 1978 and 1979 Iranian hostage crisis. There was a temporary supply disruption, but there was never a situation where there was more demand and there was oil supply. However, based upon our modeling going forward over the next year, given the fact that global oil supply has now fallen by about 2 million barrels a day, specifically outside of OPEC, that if we ever get back over 100 million barrels of global oil demand a day, which we think we're well on the way to have that happening, that next year we're going to be in a situation where we're going to have 101 million barrels a day of demand. And we may only have 100 million barrels of oil supply. And like I said, we have never ever been in that situation before in global oil markets. How oil prices react to that, is going to be very, very interesting. But that's the setup.

And there's also something else that's very interesting about oil. I don't know if you've followed the various news headlines last week, that the IEA, that is the International Energy Agency, which is sort of the global energy watchdog group that monitors global oil markets for the OECD countries. The IEA came out with a grand pronouncement, that they're recommending that all oil companies cease upstream capital spending starting now.

So we're already supply constrained in oil because of the huge cutbacks in capital spending that have taken place in the last two years. And the fact that the shales, which have been 100% of the world's supply growth over the last decade have now stop growing for a lot of interesting geological reasons, which we've written extensively about in our letters - this is only going to further crimp global oil supply going forward. And so the setup for oil, which, like I said in our last call, we outlined that it had fallen firmly into the bucket of being an uninvestable asset, is now going to wind up being the star performer in this coming decade as we progress through the 2020s.”

Interested in hearing more about why the rally in oil prices is just getting started? Check out the full video call with Leigh Goehring and Adam Rozencwajg titled Natural Resources: Uninvestable Assets or Unprecedented Opportunity? Click on the graphic below to get started. 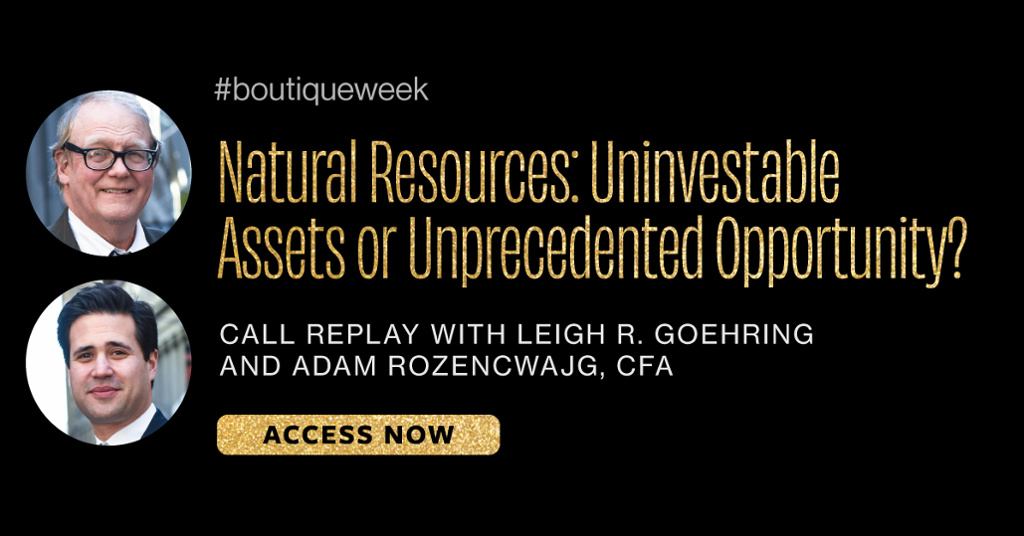