“Ghawar will not be able to increase production from here, making its 3.8 m b/d ‘maximum sustained capacity’ figure highly suspect.”

Major depletion issues are now emerging in the OPEC world, particularly in Saudi Arabia. During the first quarter, Saudi Aramco came to market with its debut public bond offering, issuing $12 bn of bonds at a blended interest-rate lower than that of the Saudi Arabian sovereign. While headlines focused on the fact that the deal was more than ten times over-subscribed, we were far more interested in the bond prospectus reserve disclosures. Since 1979, Aramco’s reserve reports have been a closely-held state secret. Throughout the 1980s, we believe Saudi Arabia reclassified its probable reserves into proved reserves and since then they have held this reported level flat at 260 bn bbl of crude oil despite having produced over 110 bn bbl during that period. We have long argued that Saudi Arabia’s reserves were nowhere near the 260 bn bbl they reported. For those who would like to learn more, please read our Q3 and Q4 2018 letters

In January 2019, Aramco summarized the results of an updated reserve report audited by the highly reputable Houston firm, DeGolyer & MacNaughton. In the summary, Aramco confirmed that Saudi crude oil reserves totaled 263 bn bbl. While this headline appeared on the surface to validate Saudi Arabia’s claims, we explained in our last quarterly letter (read Q4 2018 letter here) that we could not properly assess the reserve reconciliation between starting reserves, production, extensions, and ending reserves without seeing the full report.

After reading Aramco’s bond prospectus in depth, we can - for the first time in forty years - begin to answer some of our biggest questions about the Kingdom’s oil fields.

Most important, the prospectus confirmed our long-held view that Ghawar, Saudi Arabia’s largest field, peaked and has been declining steadily for the past decade. Ghawar was discovered in the late 1940s and formed the foundation of the Saudi oil industry for decades. 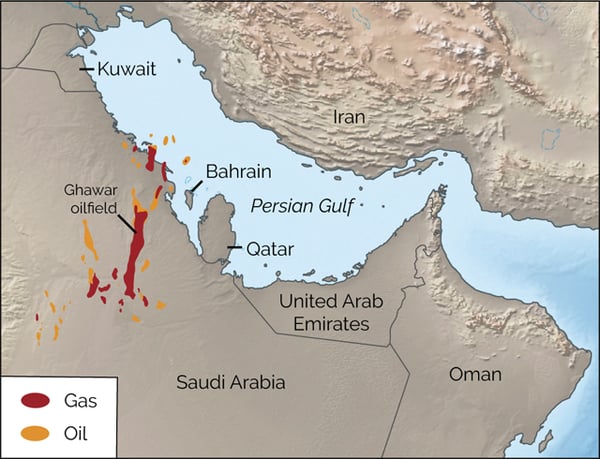 In 2005 (the last reliable data we have), Ghawar produced 5.0 mm b/d and had cumulatively produced ~55 bn bbl of crude. We fit a “Hubbert Linearization” and estimated that approximately 50% of the field’s total recoverable reserves had already been produced by 2005. According to Hubbert’s theories, a field peaks once it has produced half of its reserves and so we predicted Ghawar production was about to roll-over. Our initial estimates (made over a decade ago), predicted that production would fall from 5.0 m b/d in 2005 to approximately 3.0 m b/d by 2018. While the Aramco bond prospectus does not list historical production by field, it does disclose both the so-called “Maximum Sustained Capacity” and the remaining reserves for the major fields. Ghawar’s maximum sustained capacity is 3.8 mm b/d. Last year, Aramco produced at 85% of its sustained capacity, suggesting that Ghawar pumped approximately 3.3 mm b/d, down nearly 35% from its peak of 5.0 m b/d in 2005. This is remarkably close to our original prediction made back then.

We are more convinced than ever that Ghawar will not be able to increase production from here, making its 3.8 m b/d “maximum sustained capacity” figure highly suspect. Ghawar’s remaining liquids reserves (including condensate and NGLs) are 48 bn bbl. Given that crude oil represents 85% of Aramco’s total liquids reserves, crude-only reserves are likely 40 bn bbl. These reported Aramco reserves need to be adjusted slightly higher however, because they only cover the so-called “concession period” through 2077. Luckily, the Aramco prospectus provides the data necessary to make the adjustment. Total “Kingdom” oil reserves (i.e., geological reserves) are 30% higher than Aramco’s “Company” reserves (i.e., through the end of the concession period in 2077), suggesting that Ghawar’s total remaining oil reserves are approximately 54 bn bbl. As we mentioned earlier, cumulative oil produced totaled 55 bn bbl in 2005 and we estimate that an incremental 25 bn bbl have been produced from the field over the last 14 years. Together, Ghawar’s total recoverable reserves total 134 bn bbl of crude, of which 60% has already been produced. As we discussed, Hubbert claimed a field peaks once half its reserves have been produced. We now know this occurred at Ghawar between 2007 and 2010. Production appears to have peaked around that time as well.

Next week we will look at other Saudi fields and also examine the DeGolyer & MacNaughton audit itself.