Where Has Shale Productivity Gone?

Back in 2Q 2020, amid rapidly slowing drilling activity, a significant historical development occurred in the US shale patch. In previous drilling cycles, sharp slowdowns in activity produced large offsetting increases in drilling productivity. Drilling productivity normally rises as activity falls because of a phenomenon known as “high-grading.” In a period of low commodity prices, operators stop drilling their least productive prospects first. The remaining activity is focused almost exclusively on the areas with the highest average well productivity. Because of this high-grading phenomenon, oil production often falls far less than activity during periods of drilling retrenchment. In extreme examples, there have been instances where increases in drilling productivity have more than made up for the drilling slowdown itself. A great example of this occurred in the Permian Basin between 2014 and 2016 where production grew by 500,000 b/d or 30% despite a 60% fall in the rig count.

High grading is typically associated with the mining industry. As metal prices fall, mine operators focus on their highest-grade ore to protect cash operating margins. The greatest example took place in gold mining back in the late 1990s. In response to gold prices that fell to as low as $250 per ounce, miners severely high-graded their operations, and for a short period of time got their cash costs as low as $175 per ounce. However, high grading produced huge problems for the gold mining industry over the following 10 years. When gold prices eventually recovered, miners were never able to capture this increased margin. The gold industry, it turns out, had mined out their best ore inventory right at the bottom. Mining costs skyrocketed as gold companies were forced to mine lower and lower quality ore.

The energy industry also adopted this strategy over the last five years as the shales were dramatically high-graded. We estimate that in 2014 the average shale well in the major three basins (the Eagle Ford, Bakken and Permian) achieved a peak three-month production rate of 400 barrels per day. As prices collapsed from $100 to a low of $27 in 2016, producers dramatically slowed their activity. Between 2014 and 2018 shale well completions fell by 40%. Operators high-graded their acreage dramatically over this period and stopped drilling their least productive wells first. In 2014, we estimate that half of wells drilled were in top-quality “Tier 1” areas. By 2018 this had climbed to over 70% and average productivity responded accordingly. The average well went from having a peak production rate of 400 barrels per day in 2014 to 625 barrels per day in 2018. The surge in high-grading and its huge impact on drilling productivity largely offset the entire slowdown in drilling activity that occurred between 2014 and 2018.

Earlier this year, in response to oil prices that fell to negative levels for the first time in history, rig counts collapsed. Between March and August, operators laid down eight out of every ten rigs running, resulting in the sharpest slowdown ever. Given the magnitude and pace of the drop, productivity ought to have surged as companies curtailed drilling their least productive prospects and focused only on their best. Instead, initial production rates deteriorated in each of the major shale basins during Q2 despite the sharp slowdown in activity.

This drop in productivity is in sharp contrast to what happened between 2014 and 2017.

While the deterioration in initial production per well surprised most analysts, we have long argued that future productivity gains would be difficult if not impossible because shale producers had already high-graded their acreage as much as possible. In all three major shale basins, Tier 1 locations went from representing half of all drilling in 2014 to nearly 80% today. At the same time, the remaining inventory of undrilled locations has now skewed sharply Tier 2. We concluded the industry was in the early stages of depleting its best quality acreage and that productivity would likely plateau and begin rolling over. Furthermore, since the average well was now much more productive to begin with, any future reduction in drilling activity would have to occur by dropping your most productive (instead of your least productive) rigs. Since no additional productivity boosts were likely forthcoming, future drilling slowdowns would no longer enjoy the counterbalancing benefits of rising productivity.

The above article in an excerpt from our Q3 2020 Research. If you are interested in reading more on this topic, download below "Investing in the Un-Investable" where we explore this subject and many others. 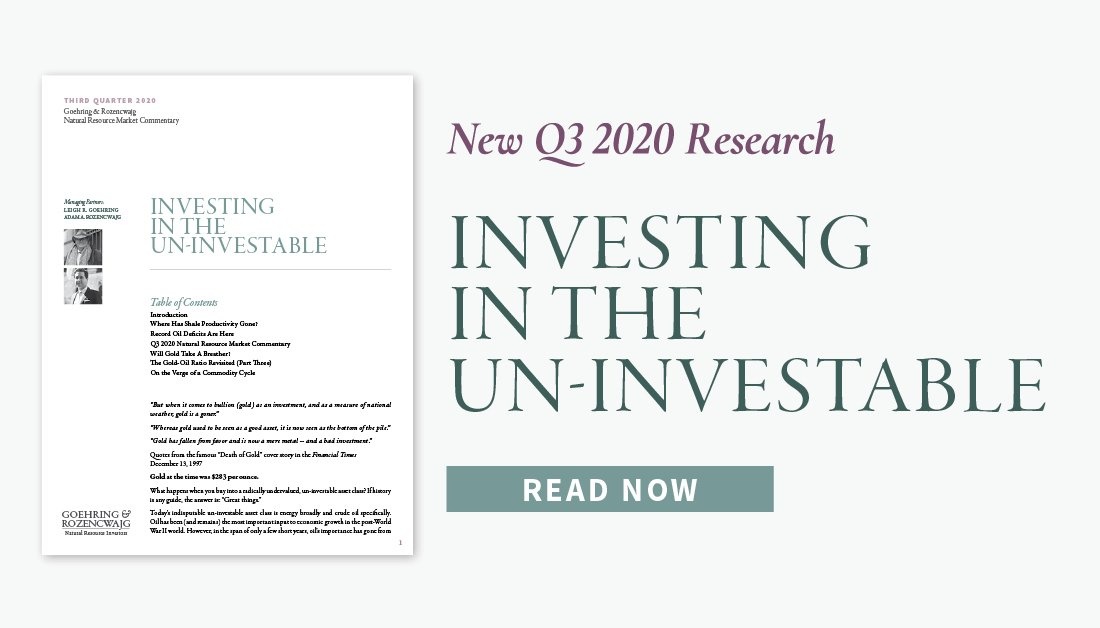