Recently, Leigh Goehring presented at the Citywire World of Boutiques virtual event. The title of his webinar was: On the Cusp of a New Commodity Cycle. In the presentation, one of the concepts he discusses is how commodities today are actually cheaper than during the 1920s, 1960s or 1990s and how inflation could be a catalyst that propels natural resource stocks into a bull market. In today's post, we review this portion of his presentation.

One of the most interesting things about commodities is that they often move in huge, long cycles that many times last decades, and the price direction of commodities is usually inversely correlated with the stock market.

For example, if an investor had made investments in natural resource assets during any one of the periods of radical commodity undervaluation, the returns that they would have made over the next five to ten years would have been spectacular.

Even in 1929, which was the first instance in the last 120 year period, which was on the verge of the Great Depression, if you had chosen to invest in commodities directly through something like the Goldman Sachs Commodity Index (if it had existed back then), by 1936, you would have gained 7.2%. If an investor decided to invest in oil stocks, they would've lost 2%, and mining stocks lost 15%.

However, if you had been an investor in gold stocks, your investment would have soared by almost six-fold. While some of these numbers outside of gold stocks don't sound that impressive, remember the general stock market, as measured by the Dow Jones Industrial average during the same time period, fell by over 60%.

What if you decided to invest in commodity-related stocks in the late 1960s? If you invested in commodities directly, you would have returned more than eight-fold on your money by 1981. If you decide to invest instead, for example, in gold stocks, your investments would have risen more than twelve-fold, while oil stocks were a little less than an eight-fold return, and coal stocks were the winners soaring thirteen-fold.

In comparison, the stock market from 1965 to the beginning of 1980 was barely able to show a return of about 100%, including the huge 1973 - 1975 -50% bear market. As you incorporated the high inflation that existed back in the 1970s, the stock market, in real terms, was actually down over that period.

For example, had you invested directly in commodities from 1999 to 2010, you had returned almost 400%. If you invested in commodity-related equities, you would have done significantly better. Mining stocks advanced over eight-fold, coal stocks were again the winners up nineteen-fold, gold stocks rose almost 900%, and oil stocks advanced about four-fold as well. Again, as in the two previous periods, 1929 and 1965, you would have hugely outperformed the stock market, which barely notched a 50% rise during the same time period and included two huge bear markets (the breaking of the dot-com bubble in 2000 and the 2008 financial crisis, both of which saw the S&P 500 experience huge drawdowns.)

If you are interested in learning more about the potential catalysts that could propel commodities into the next bull market, please click on the graphic below to watch the full webinar presentation replay. 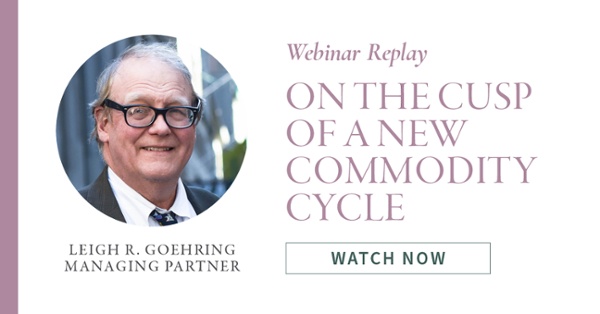