Between October 2006 and June 2007, uranium spot prices rose from approximately $60 to over $130 per pound. This was at least partially a result of the 2006 flooding of the Cigar Lake Mine in Saskatchewan, which has the largest high-grade uranium ore deposit in the world. New disruptions at McArthur River, along with increased participation from financial investors, have contributed to strengthening uranium prices recently. 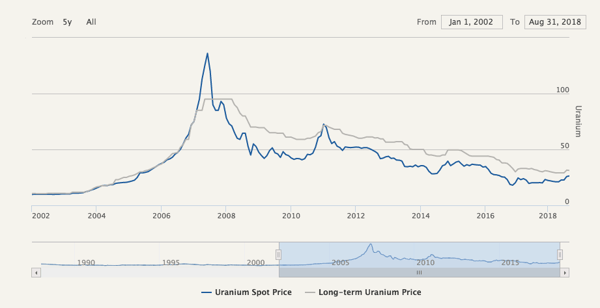 Two very interesting and important data points around uranium have emerged this year. First, as we have mentioned in our quarterly letters, we believe the next uranium bull market will be greatly assisted by the completely-unexpected emergence of a new source of demand—the financial investor. Two significant uranium purchases were recently made by financial investors, which we believe shows the huge potential demand from this new source. We received many inquiries after we published our bullish price outlook in our last two letters and we believe this is an indication that many investors are searching for ways to play the upcoming uranium bull market, including investments in the actual metal.

It’s unusual for investors to show such an interest in a commodity before a bull market starts, and we believe it represents the large potential investor demand for physical metal that could develop. In the last uranium bull market, we did see some hedge fund accumulation of physical uranium, but those investments were made after uranium prices had already risen ten-fold.

Second, on a recent conference call, Cameco told investors that as a result of suspending operations at McArthur River, Cameco would be 24 mm lbs. short in its ability to fulfill contractual supply agreements. The company said approximately 15 mm lbs. of uranium would come from their own inventory, but that at some point they would have to enter the physical spot market to purchase an additional 10 mm lbs. to satisfy remaining commitments. The physical spot uranium market is extremely small (estimated by analysts to be only 10 to 20 mm lbs.) and we will soon get a good test of exactly how much physical inventory is actually available to the market. We remain extremely bullish on uranium.

To read more of our Q2 2018 letter, please download it here.