What makes us so bullish, especially when everyone else is so bearish?

Often in severe bear markets, obvious bullish data points sit right in front of us and yet no one seems to notice. Our current commodity and natural resource research espouses quite a few reasons along with supporting research for our stance.

In our Q2 2017 letter, we outlined our belief that we were at the bottom of the cycle in commodity prices with a chart which plotted commodity prices against stock prices going back 100 years. 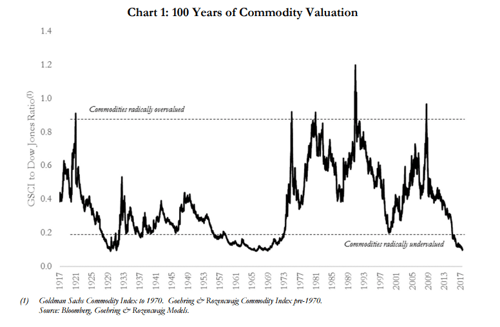 The chart distinctly shows only three periods (1929, 1970, and 1999) where commodity prices had been as depressed relative to financial assets as they were in 2017. We theorized that, if 2017 turned out to be similar to those previous periods, huge outsized returns awaited those investors willing to make large contrarian investments in commodities. Since we wrote this essay many months ago, nothing has occurred to make us change our super-bullish commodity outlook.  In fact, we are more bullish than ever.

"In the great 1970 commodity bull market, both gold and silver were the best performing commodities during that decade.   Although the oil bull market and its related shortages garnered the most headlines, the 1,000% gain in oil prices during the decade paled in comparison to the more than 2,000% gains experienced by gold and silver."

We want to stress an important point about the upcoming huge bull market in commodities:  it will include (and may even be led by) a huge bull market in gold and other precious metals. In each of the three previous periods of radical commodity undervaluation just mentioned, gold and silver investments fully participated or actually led the ensuing commodity bull market.  In the great 1970 commodity bull market, both gold and silver were the best performing commodities during that decade. Although the oil bull market and its related shortages garnered the most headlines, the 1,000% gain in oil prices during the decade paled in comparison to the more than 2,000% gains experienced by gold and silver. In the great commodity bull market of last decade, both gold and silver kept pace with all other commodities. For example, between 2000 and 2010, copper wound up advancing almost 500% while oil was up over 500%. Gold and silver meanwhile kept up advancing by approximately 450% and 500%, respectively. Even in the 1929 to 1947 commodity bull market, which encompassed both the Great Depression and World War II, gold again was the market leader. From 1929 to 1947, gold (reset in price by the Roosevelt administration in 1934) rose by 70%. In comparison, silver rose by 50%, copper by 30%, and oil by 50%. The only commodities to outperform gold during the 1929-1947 bull market were the grains. Prices for corn, wheat, and soybeans advanced almost 200%, 120% and 70% respectively from their 1929 price levels.

Prices rose between 2 to 3% for most of the precious metals in the fourth quarter of 2017. The standout was palladium, which rose 13% during the fourth quarter.  Continued strong gasoline auto demand in China (palladium is the PGM metal of choice for gasoline engines, while platinum is used with diesel) pushed palladium prices higher. During the quarter, gold stocks, as measured by the NYSE Gold Bugs Index, matched the return of gold and rose a little over 2%. For the year, palladium was the standout precious metal, rising over 55% for the year. Gold rose 13%, silver rose 7%, and platinum rose 3%.

For gold investors, please read the “Gold Market” section of this quarter's letter carefully.  We believe our analysis provides an excellent road map on how a commodity investor should navigate the precious metal market in the coming decade.

Please share your thoughts or questions on anything related to commodities and natural resources. We welcome the dialogue! 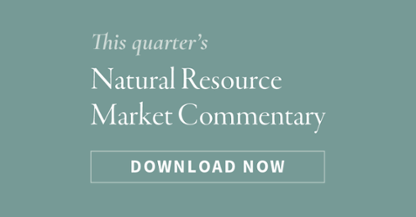