Is Inflation Here to Stay? 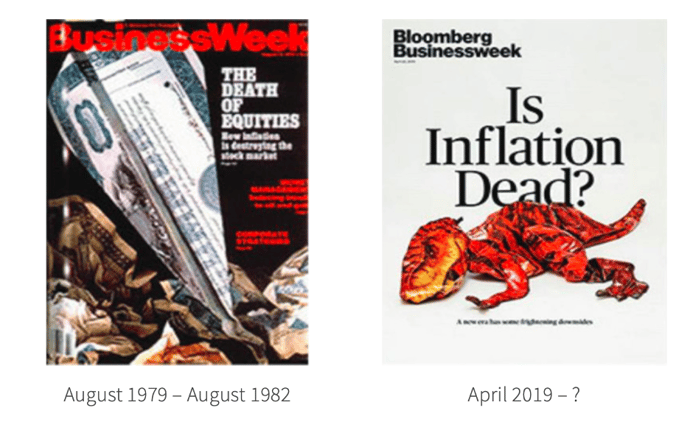 Regarding our opinion on the inflation debate here at Goehring & Rozencwajg, we have no doubt: inflation is going to return with a vengeance.

In 1Q19, we wrote that we had received an unexpected and extremely strong signal that inflation would return as a huge problem this decade. On April 20, 2019, BusinessWeek/ Bloomberg magazine ran a cover story that included a picture of a dead dinosaur with the headline: “Is Inflation Dead — A New Era Has Some Frightening Downsides.” We are big believers in the contrarian messages put forward by business magazine covers. Probably the best example ever of a terrible call was the August 1979 issue of Business- Week with the cover line “The Death of Equities — How Inflation is Destroying the Stock Market” in which BusinessWeek outlined how inflation (then considered an intractable problem) would depress equity returns for a generation of investors.

In retrospect, this was probably the worse market call ever made. Instead of intractable, the inflation problem was about to be solved. Stocks and bonds turned out to the “buy of a lifetime,” and the inflationary-sensitive assets recommended by BusinessWeek entered into a grueling 20-year bear market only months after the publication of their cover story.

As we wrote in our 1Q19 letter, we believe the April 20th issue of BusinessWeek (now BusinessWeek/Bloomberg) will be as important as the infamous August 1979 issue.

Back in 1979, inflation had been an ever escalating problem since the end of World War II. The stock market peaked in 1966 before falling by 15% over the next 13 years. Factoring in inflation, the Dow Jones Industrial Average lost 70% in real terms between 1966 and 1979. Bonds were dubbed “certificates of confiscation” after having fallen in price for four decades, and gold and silver had become the “must-own” asset class.

By 1979, inflation had become so ingrained that even the editors of BusinessWeek felt comfortable enough to prematurely declare the death of an asset class that had been around for almost 400 years. Since the publication of that cover story, stocks entered into the greatest bull market in financial history. Stocks today are 40 times higher than they were in 1979.

And inflation? Inflation peaked nine months after the BusinessWeek cover story and has spent the last 40 years steadily receding. For those willing to do the opposite of everything BusinessWeek recommended back in 1979, you were rewarded with four decades of the most phenomenal investment returns imaginable.

Today’s stock market trades at record high valuation levels while interest rates have never been lower. The 30-year Treasury yield hit an all-time low of 1.25% last summer and $15 trillion of sovereign debt now trades with negative yields — a first in 4,000 years of financial history. Record-high stock and bond prices clearly signal that investors are convinced inflation will never return. Investors who read BusinessWeek back in 1979 were tipped off that a trend in place for years — inflation — was about to reverse with massive investment implications. Readers of BusinessWeek/Bloomberg in 2019, have now been tipped off that a trend in place for 40 years — disinflation — is about to reverse as well. The magnitude of the investment implication will be just as large as it was in 1979.

One of the funny aspects of business magazine cover stories is that in the short term they are perceived to be correct. The rare contrarian investor who bought the stock market in August 1979 spent the next three years frustrated as the stock market continued to drift lower, inflation continued to advance, and riskless money market yields surpassed 20%. It was not until August 1982, three years after the publication of the BusinessWeek article that investors suddenly recognized the financial landscape had dramatically changed. The stock market exploded off the bottom on August 17th and never looked back.

Similarly, gold investors were given a quintessential buy signal when, after 17 years of a brutal bear market, the Financial Times ran a December 1997 cover story entitled “The Death of Gold.” Just like with BusinessWeek, contrarian investors who bought gold remained frustrated as prices drifted lower. Gold finally bottomed at $258 per ounce in 1Q01, three years after the “Death of Gold” story. An investor who bought gold in 1997 suffered three years of frustration and losses before gold turned into the best performing asset class of the decade.

In our 1Q19 letter, we discussed the time delays associated with both the 1979 “Death of Equities” and 1997 “Death of Gold” cover stories and we mentioned that we should expect a similar time delay to emerge following BusinessWeek/Bloomberg’s 2019 “Is Inflation Dead?” piece.

Two years have passed and we believe we are rapidly approaching inflation’s inflection point. Multiple fundamental trends now confirm this view. In 2019, M2 was only growing at 4% per year; today it is growing at 27% per year — the fastest rate in history. In 2019, the Federal Reserve’s balance sheet stood at $4.3 tr compared with $7.3 tr today. In 2019, US government debt totaled $20 tr. Two short years later, it stands at $28 tr — up 40%.

Over the last year, the US government has borrowed and spent $2.4 trillion to replace $800 billion of lost economic activity resulting in a US savings glut of nearly $1.5 tr. Not content with the massive surge in government spending, the Biden administration is proposing an additional $3 tr in stimulus spending.

With the economy now starting to recover, the press is filled with stories of shortages that have developed in countless markets from lumber to semiconductors to restaurant workers to ketchup packets.

Economically sensitive commodities such as copper have entered into new bull markets while surging grain prices warn of significant food inflation ahead. Consumers are in excellent financial condition and have signaled their strong desire to engage in a huge catch-up consumption binge as vaccinations are successfully rolled out.

The COVID-19 economic shock has been unique in another way. Historically, large drops in GDP, such as the 32% annualized drop experienced in 2Q20, have been associated with financial panics and banking crises (for example, the 2008–2009 global financial crisis). An impaired banking system often hindered economic growth for years following the panic — again think no further back than the 2008–2009 financial crisis as a great example.

Because banks were impaired post 2008–2009, central banks were unable to stimulate lending, credit creation, or economic growth even with massive money printing efforts. Instead, most of the money printed by central banks after the 2008–2009 financial crisis ended up as “excess reserves” on central banks’ balance sheets — all that printed money went nowhere.

As opposed to 2008, today’s global economy is emerging from a huge economic contraction with a fully functioning banking system. Although the COVID-19-related economic lockdown caused a stock market panic (the S&P 500 dropped almost 35% in 30 days), the global banking system emerged from the economic turmoil last year in excellent shape. Thanks to that, the creation of new money is already finding its way into the economy. M2 growth is now surging at unprecedented rates — 27% at last look.

The inflation signal, first delivered by the April 2019 BusinessWeek/Bloomberg cover story, is now being confirmed by underlying economic and financial data. Money supply growth is surging and physical shortages are developing. The banking system is in excellent shape and stands ready to lend.

Despite these trends, investors continue to pile into technology stocks, SPACs, cryptocurrencies and long-term bonds; each of which will perform terribly in an inflationary environment. In stark contrast, inflation hedges such as commodities and natural resources remain priced at record low levels relative to financial assets and are ignored by almost all investors.

The countdown to inflation is ticking and we are getting closer and closer to an explosion in inflationary pressures. All economic signs point in that direction, yet few investors are prepared to protect themselves, yet alone profit from an investment landscape that is about to suddenly and radically change. It’s 1979 all over again — except in reverse. 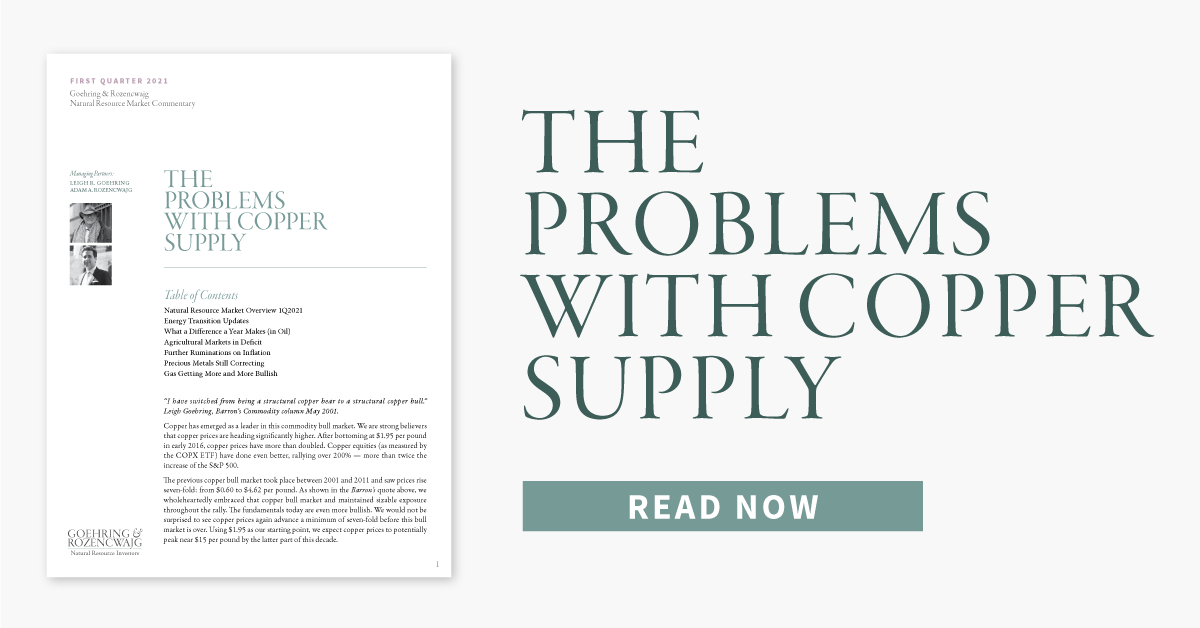