The article below is an excerpt from our Q4 2021 commentary.

Without US liquefied natural gas (LNG), Europe may well have frozen literally to death this winter. We believe what is happening with global natural gas is a harbinger of things to come for the rest of the energy complex as well.

North American readers could be forgiven for not appreciating how fast international gas markets have turned from surplus to deficit. In May 2020, European 1-month ahead natural gas prices (as measured by the TTF index) reached $1.24 per mcf – an all-time low. By December 2021, prices had spiked to $59.97 per mcf (equivalent to $360 per barrel oil). Prices have pulled back but remain at $25 per mcf (equivalent to $150 per barrel oil) – higher than any other time in the past 20 years. LNG prices into Asia, as measured by the JKM Japan-South Korea Swap Index, bottomed at $2.00 per mcf in 2020, rallied to $49.00 in 2021 and have now settled back to $25 per mcf.

Factories have been forced to shut across the UK, Europe, and Asia after not being able to secure natural gas. Nitrogen based fertilizers rely on natural gas as a key feedstock, and as a result CF closed several facilities in the UK. The agricultural section discusses how the natural gas crisis will impact our food supply.

As the Northern Hemisphere winter draws to a close, there is relief in sight as heating demand wanes. However, there are lingering consequences that will persist. For example, despite using record-high prices to attract imports, Europe was unable to stop inventories from drawing relative to seasonal averages. Based upon the most recent data, European natural gas storage stands at 1.3 tcf – the lowest absolute level for this time of year since 2011. European storage typically ends the winter heating season at 36% capacity by the end of March. Currently, storage is only 35% full, with seven weeks of withdrawal still to come. On average, storage draws by another 14 percentage points between now and the end of the withdrawal period. If withdrawals average even half the normal rate, European storage will end the season way below the 30% capacity – the same level that produced last year’s crisis. Unless natural gas injections are dramatically accelerated throughout the spring and summer, Europe risks heading into next winter with dangerously low inventories once again. How will they source the gas?

Europe’s natural gas shortage has impacted geopolitics as well. Russian exports to Europe have fallen by half compared with seasonal averages. Currently, Russia sends gas to Europe via Ukraine and Poland. Nord Stream 2 would circumnavigate these countries and deliver gas directly into Germany, allowing Russia to threaten Ukrainian energy security without simultaneously threatening all of Europe. The United States has warned Russia against using Nord Stream 2 as a political bargaining chip and has proposed sanctions on gas flowing through Nord Stream 2. With the pipeline now complete, the next step is for German regulatory authorities to approve the project which is unlikely until at least the second half of the year. In the meantime, Europe must import all its Russian gas via Ukraine with substantial risk for disruption.

These dynamics left European LNG buyers scrambling to bid away global cargos. Much of this demand has been met by US exports which has been dubbed “freedom gas.” Middle Eastern cargos meant for Japan were recently diverted to Europe as well which further tightens the Asian market. The current European tightness may be blamed on unreliable renewables, cold weather, or Russian posturing, but ultimately the underlying cause has been strong Asian demand. European utility buyers felt they could source LNG cargos only to realize that incredibly strong Asian demand had drawn away any available excess supply. This trend will only accelerate from here. As countries get richer, they demand not only more energy but also cleaner energy. Natural gas is a much cleaner-burning fuel than coal and many emerging market economies have steadily sought to shift from the former to the latter. This shift will only accelerate going forward. For a more detailed discuss on the reasons behind the strength in LNG demand, please read the essay: “LNG Demand Set to Surge” in our 4Q20 letter.

Natural gas in the US is expensive by recent standards, but cheap compared with the rest of the world. After bottoming in June 2020 at $1.48 per mcf, Henry Hub spiked to $6.31 by January 27th before settling back to $4.00. While these were some of the highest prices in the past decade, they remain 85% below global LNG. The difference is because the United States is bottlenecked in terms of its export capability. Last year, the US exported 10 bcf/d of LNG, effectively utilizing all available liquefaction capability. Once LNG exports are maxed out, North America reverts to an isolated market and gas prices decouple from the rest of the world. Any industry that can take advantage of the arbitrage between US and world prices is currently doing so such as LNG, petrochemicals, and nitrogen-based fertilizer production.

Expansions at Cheniere’s Sabine Pass and the start of a new US LNG export terminal, Calcasieu Pass, will push LNG export from 10 bcf/d to nearly 12 bcf/d in 2022 leaving the US as the largest LNG supplier in the world, ahead of Australia and Qatar. This is an incredible milestone, considering that, as recently as the mid-2000s, consensus opinion held that the US would require massive LNG import terminals to meet domestic demand.

All this demand is having an impact on US inventories which now stand 250 bcf below seasonal averages. Although not as dire as Europe, the US remains vulnerable to any bout of cold winter between now and the end of the winter heating season in late March. One interesting observation is that over the past decade, North American autumns have become milder while springs have become colder. If this pattern occurs this year, prices could spike.

On the supply side, the US shales are once again growing. Between January 1st and December 31st, the shales grew by 2.4 bcf/d after having declined by 1 bcf/d over the same period in 2020. While this is certainly an abrupt change, it’s a far cry from the 2017 to 2019 period when US gas supply regularly grew by 10 bcf/d or more each year. Last year’s growth came mostly from Haynesville shale in east Texas and Louisiana which saw dry production grow from 12.5 bcf/d in December 2020 to 14 bcf/d twelve months later. Our models tell us this growth may be harder to achieve this year. Much of last year’s acceleration was caused by drilled but uncompleted wells. Between December 2020 and 2021, operators increased their drilling activity by 28% from 39 to 50 wells per month. Over the same period, they increased their completion activity by 150% from 23 wells to 58 wells per month. Since 2014, the industry on average has completed 93% of the wells it has drilled and if that ratio holds again in 2022, production growth will likely slow from 1.5 bcf/d from January 1st to December 31st to only 500,000 mmcf/d.

The other main source of growth was the Permian Basin. As we discussed in our oil section, DUC liquidation had a huge impact in 2021. Whereas the industry normally completes 93% of the wells it drills, 2021 saw this jump to 150% -- clearly unsustainable. Were the Permian operators to revert to its long-term average, dry gas production would likely stop growing entirely. Also, keep in mind LNG export capacity will increase by 2 bcf/d this year and all that supply will likely be needed to meet international demand. Therefore, if the US shales do grow, albeit at a slower rate, domestic inventories will likely fall from here. If we experience a colder than normal later winter and spring in the US, we could see significant upside price pressure.

We are currently undertaking a major overhaul of our neural network models and hope to have new insights regarding US shale production in our next letter.

International natural gas markets will likely be driven by weather as we enter into the shoulder season, and we would not be surprised if prices moderated from here. However, mild temperatures do not change the underlying tightness in global gas markets. Demand from emerging markets remains extremely strong (something we have predicted for nearly a decade) while capital investment in new global gas projects remain de minimis.

Europe may not freeze this winter, but the challenges to the global gas markets are not over yet.

Interested in reading more on this topic? Download our full Q4 2021 letter, The Distortions of Cheap Energy. 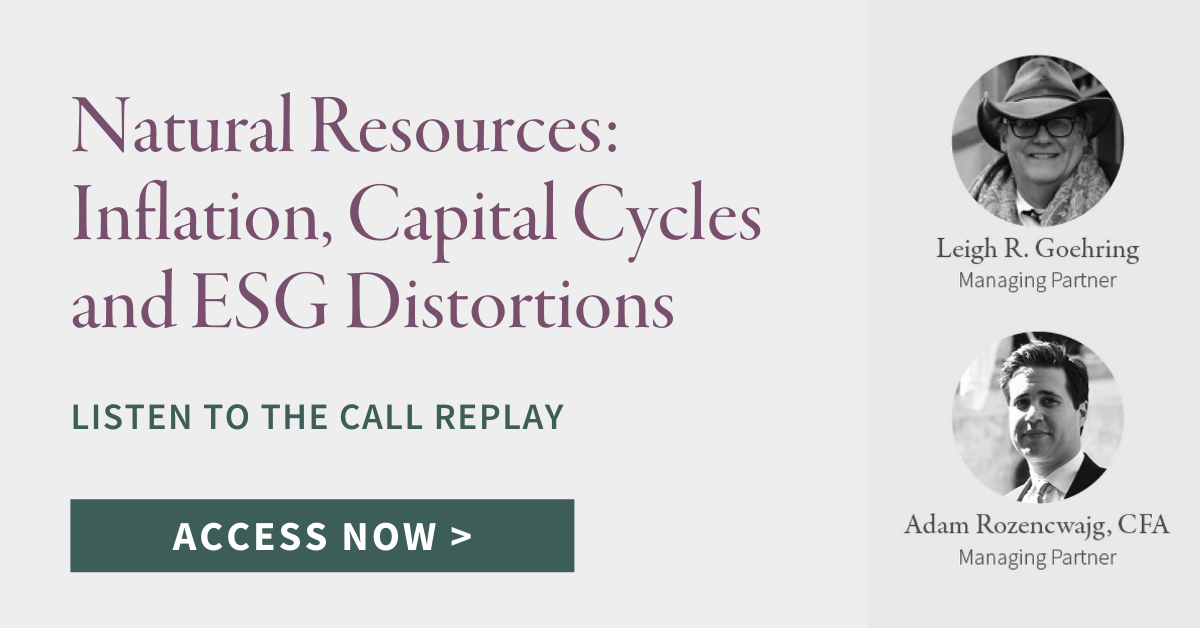