Precious Metals: The Impact of Inflation

As our readers know, we believe a huge bull market in precious metals sits directly in front of us. For proof, we look no further than the April 22, 2019 Bloomberg Businessweek cover. Nearly 40 years prior, Businessweek’s August 1979 cover story, “The “Death of Equities,” told how inflation would remain an intractable problem and hard assets would continue to outperform financial assets. While that BusinessWeek cover story is best remembered as a great contrarian signal to buy financial assets, it was also a great contrarian signal to sell those assets that benefitted from rising inflation. Only five months after that publication, gold and silver (having enjoyed huge bull markets for the previous nine years), both spiked in a spectacular parabolic blow-off and then crashed. Both metals entered into huge bear markets that ended some 22 years later. 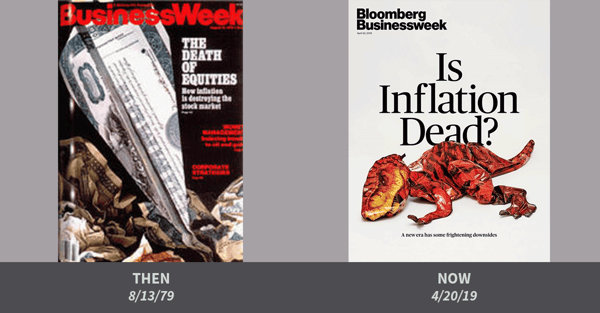 On the flip side, a huge buy signal for precious metals occurred when the Financial Times ran its famous cover story “The Death of Gold” back on December 13, 1997. The subtitle read: “Gold has fallen from grace and is now a mere metal and a bad investment.” Although the cover story did not coincide with the exact bottom of the gold bear market (that occurred three years later), buying gold on the publication date, at $285 per ounce, turned out to be an excellent entry point.

We believe the rally in gold that started back in the early 2000s, which took gold from $260 to $1,900 per ounce, was only the first of a multi-stage bull market. Although gold is thought of as an inflation hedge, the last bull move in gold from 2000 to 2011 occurred during a largely-deflationary period. If the April 22, 2019 Bloomberg Businessweek cover story “Is Inflation Dead” is the contrarian signal that inflation is indeed about to return with a vengeance, then gold investors have another compelling reason to begin accumulating precious metal investments.

As opposed to the precious metal bull market of the 1970s, last decade’s bull market took place with little in the way of speculator activity. While there was some hedge fund buying (through physical-metal ETFs) between 2008 and 2011, most of the buying came from Indian and Chinese buyers, both of whom bought in an extremely orderly way. The 1970s precious metal bull market, in contrast, was driven by Western speculators (the most famous being the Hunt brothers) and was characterized by multiple periods of frenzied activity.

Why was the 1970s bull market characterized by huge speculative activity while the 2000s saw relative speculator disinterest? We think the answer is simple: inflation.

In the 1970s, inflation was a prime motivating factor. Ever-rising inflation created a huge urgency for investors to increase their precious-metals holdings. The 2000s precious metal bull market, on the other hand, took place during a period of relatively-benign inflation. We believe this lack of inflation explains why gold rose seven-fold last decade in such an orderly fashion. Given declining inflationary pressures, investors felt little rush to become involved with precious metals.

However, we believe that this is all about to change in the next several years. The famed newsletter writer Richard Russell would remind his readers that “there is no fever like gold fever.” If we are right that the April 22, 2019 Bloomberg Businessweek cover story signals that inflation will once again emerge as a huge problem in the next several years, then the next leg of the precious metal bull market will be characterized by huge amounts of speculative activity, just like what happened back in the 1970s.