The Disconnect Between Oil Stocks and Oil Prices Continues

“The extreme bearishness towards energy related equities reminds us of the precious metals markets back in the late 1990s.”

After extensive weakness in both Q2 and Q3, natural resources enjoyed a modest rebound in Q4 2019. For example, after pulling back 35% from the April highs, oil rebounded 12% in Q4. The rally was driven by a combination of reduced trade war rhetoric, looser US monetary policy, and an increased understanding that US shale oil production growth will slow in 2020.

Continuing a trend of the last several years, exploration and production stocks lagged the oil prices. For example, the S&P E&P Index (XOP ETF) rose only 6.4% for the quarter. A bright spot among energy related equities was the oilfield service sector. After being pummeled on news of continued weak North American upstream capital spending trends, oil service stocks (as measured by the OIH ETF) rebounded 15% during the quarter, outpacing the oil price itself. For the year, energy-related stocks performed terribly. While the S&P 500 and WTI each rose over 30%, E&P and oil service stocks fell by 9% and 4%, respectively.

With the global investment community now gripped by environmental and sustainability (ESG) concerns, capital continues to pour out of investments perceived to be most impacted. Companies that produce and service the global oil and gas industry are being liquidated as a result. The impact of this liquidation is clear when you compare the performance of oil and gas stocks with other commodity producers. For example, since commodity prices bottomed in Q1 of 2016, oil prices have rallied 125% while the average E&P stock advanced only 12%. By comparison, gold has only rallied 45% from its bottom while the average gold stock (as measured by the GDX ETF) advanced 135%. Similarly, copper rallied 45% from its 2016 low while the average copper stock (as measured by the COPX ETF) advanced by 130%.

Oil Stocks Have Lagged the Commodity 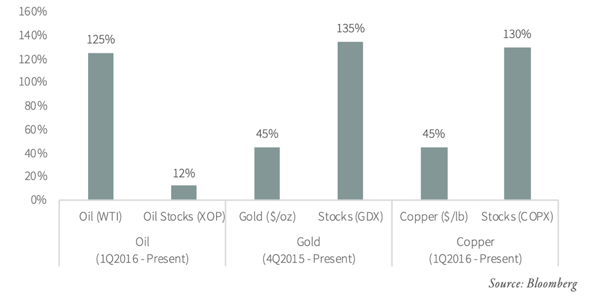 The extreme bearishness towards energy related equities reminds us of the precious metals markets back in the late 1990s. Today, energy bears believe that the industry is faced with both “peak demand” and potential financial liabilities stemming from climate change damages if and when they occur. Back in the late 1990s, investors were convinced global central banks would continue selling the remainder of their gold reserves--a process that had started ten years earlier and had accelerated throughout the decade. With announcements that the newly formed Euro would not require any gold backing and the UK would sell its remaining gold, it seemed as though the bears would prevail. The final blow occurred when the Swiss announced they would abandon the Franc’s gold backing and liquidate half of their substantial reserves. By 1999 investors were convinced that European Central Banks would sell all their remaining gold--a process that would take at least 25 years.

But something strange happened to the bearish thesis that was accepted unanimously in 1999: it never happened. Instead of selling persistently for the next 25 years, European central banks slowly wound down their liquidation and by 2009 central banks had turned into significant gold buyers. We covered this in our introductory essay “The Gold Bull Market is Here” in our Q2 2019 letter. In the late 1990s, for the few contrarian investors who capitalized on the opportunity, the rewards were huge. Between 1999 and 2011, gold prices rose over seven-fold while gold equities rose twelve-fold.

We believe today’s oil market is in the same position. Investors have constructed an extremely bearish thesis resulting in massive liquidation. This liquidation in turn has created incredible value in the related equites. If we are right, this bearish thesis will fail to materialize just like with gold in the late 1990s.

In our latest in-depth commentary, THE UNINTENDED CONSEQUENCES OF HIGH GRADING, we explore this subject and many others.  If you are interested in reading the document, download the full commentary below. 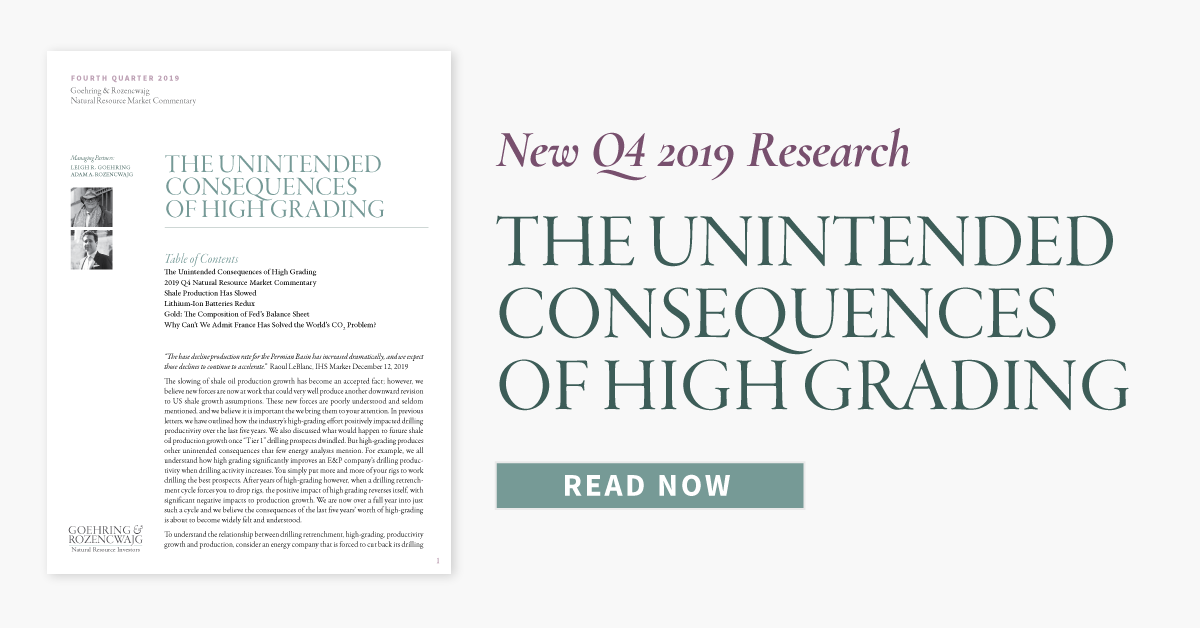