The Energy Crisis is Here - What's Coming Next?

“Europe’s Energy Crisis Is Coming for the Rest of the World, Too”
Bloomberg, September 27, 2021

First appeared in our Q3 2021 commentary

The energy crisis unfolding across Europe, Asia, and South America caught almost everybody by surprise – but not our readers, we hope. Our Q2 2020 Natural Resource Market Commentary was titled “On the Verge of an Energy Crisis.” Fast forward 14 months: the energy crisis we predicted has arrived with a vengeance.

Yet, we assumed the energy crisis would first hit global crude markets and then spill over into natural gas. Instead, the opposite has occurred: tightness in global gas markets is now impacting crude.

We thought extremely strong oil demand, coupled with a feeble rebound in non-OPEC production, would lead to a situation never seen in 160 years of crude history: demand would actually surpass global pumping capability by the end of 2022. Even during the two energy crises of the 1970s (the Arab oil embargo of 1973 and the Iranian hostage crisis of 1979), crude demand did not come close to exceeding global pumping capability. Recent data strongly suggests our modelling was correct: demand will exceed pumping capacity by the end of next year.

In retrospect, we know that natural gas markets, not oil markets, were the first to slip into severe deficit (we should point that we were also extremely bullish on gas, and we maintained strong exposure to natural gas investments as well). Low inventory levels, extremely strong demand, and disappointing output from renewable sources (primarily wind and hydro), have caused European and Asian natural gas prices to soar.

By September 2021, prices in Europe and Asia reached between $32-33 per mmbtu, equivalent to a crude price of $200 per barrel based on the energy contained in each. In a frantic attempt to meet demand, European and Asian buyers have turned to spot liquefied natural gas cargos only to realize that global LNG markets have also slipped into a severe structural deficit. Again, our readers should not be surprised. In our Q4 2020 letter we wrote: “LNG Demand (Is) Set to Surge.” We discussed how global natural gas demand would outstrip all sources of supply. Natural gas balances are now at dangerously low levels, especially in Europe. The slightest bout of colder than normal winter weather could have catastrophic impacts as shortages develop and prices surge. The crisis now gripping natural gas will only be the first of many energy (and agricultural) crises that emerge in the next five years.

Investors need to recognize how interlocked energy markets have become. A crisis in one market is all but certain to spill over into another. European utilities are desperately switching from burning expensive natural gas to much less expensive crude oil, increasing demand by over 500,000 b/d. This additional source of demand has introduced even more tightness into an oil market that is already undersupplied. The oil crisis we had originally expected to emerge in 4Q22 will now likely come even sooner. As the natural gas shortage did, the coming oil crisis will seemingly come out of nowhere, taking much of the investment community by surprise.

Energy markets are also tightly bound to global agriculture. We believe agricultural markets are primed to slip into crisis at some point this decade. As energy shortages have spread, many fertilizer and soybean processing plants in China and the UK have already been shut. We discuss the connection between the unfolding energy crisis and global agriculture in our Q3 2021 letter.

How did this energy crisis emerge so quickly and unexpectedly? The most important cause has been the ongoing underestimation of global energy demand. In turn, this resulted in dramatic underinvestment in oil and gas development.

Over the last 20 years, there has been a surge of energy demand, a phenomenon we call the “S-Curve.” As a country gets richer, energy demand grows faster than economic activity for a period of time. We estimate that in 1995 approximately 700 mm people were in the midst of their “S-Curve.” Today, there are almost 4 billion people in this category – the most in history.

Coinciding with the explosion of energy-hungry consumers is the misguided focus on renewable energy over the last 10 years. Mounting ESG pressures forced energy companies to significantly reduce their traditional hydrocarbon investment while dramatically increasing commitments to renewable energy projects. Wind and solar have a fundamental problem: they are intermittent and therefore unsuited for baseload power.

We have argued that surging demand from the S-Curve combined with a reduction of traditional energy capital spending would prove unsustainable. The result is the energy crisis unfolding today. We are still in the very early innings of this new cycle.

In the short term, the biggest variable is the weather. As many of our readers know, we believe we are entering a prolonged cooling phase that will produce many unfortunate and unforeseen outcomes. Evidence continues to emerge suggesting we have entered into a long phase of reduced sun-spot activity. Typically, these periods are associated with longer, colder winters, shorter growing seasons, and more violently destructive weather.

Although this past Northern Hemisphere summer was one of the warmest on record, the Southern Hemisphere winter was just the opposite. An extensive winter storm led to near-record low temperatures and left large swaths of southern Brazil blanketed under snow for the first time in 65 years. An incursion of cold Antarctic air produced one of the worst freezes in the heart of Brazil’s coffee growing region, sending coffee bean prices soaring. And although it has garnered absolutely no press, Antarctica has just experienced its coldest winter on record, leaving its sea ice at the fifth highest reading since records began in 1979.

Given that we are now well into our third consecutive 11-year sunspot cycle with lower sequential maximal activity, and that Eastern Pacific Ocean conditions point to a moderate La Niña, we believe the risk of a severe Northern hemisphere winter is real. Russia experienced its coldest September in two decades while Europe broadly has had a cold start to autumn. A colder than normal winter would have a catastrophic impact on already depleted natural gas inventories.

Oil markets will likely be the next to undergo severe stress. Inventories have drawn at a record pace and now stand well below normal. Non-OPEC production growth has disappointed while strong demand continues to surprise.

Last quarter, we discussed the International Energy Agency’s latest climate policies and how they would produce unintended consequences. One consequence that has emerged even faster than we had expected: allowing OPEC to regain market share and pricing power.

Despite having aggressively promoted legislation that echoed the IEA and discouraged domestic oil production, on August 11th, 2021, the Biden administration called on OPEC to increase production to help ease high prices. OPEC rejected Biden’s request and crude prices having rallied over 20% since.

The energy crisis has just started. Over the next decade, this new cycle will unfold with many unanticipated twists and turns. The investment implications and opportunities remain incredibly large. In an ironic twist, institutional investors have little to no exposure to energy stocks. We would not be surprised if energy ended up representing investors’ single largest exposure at some point before the decade is over.

For all investors, we continue to recommend maximum exposure.

Intrigued? To read more on this subject, we encourage you to download our full Q3 2021 commentary, available below. 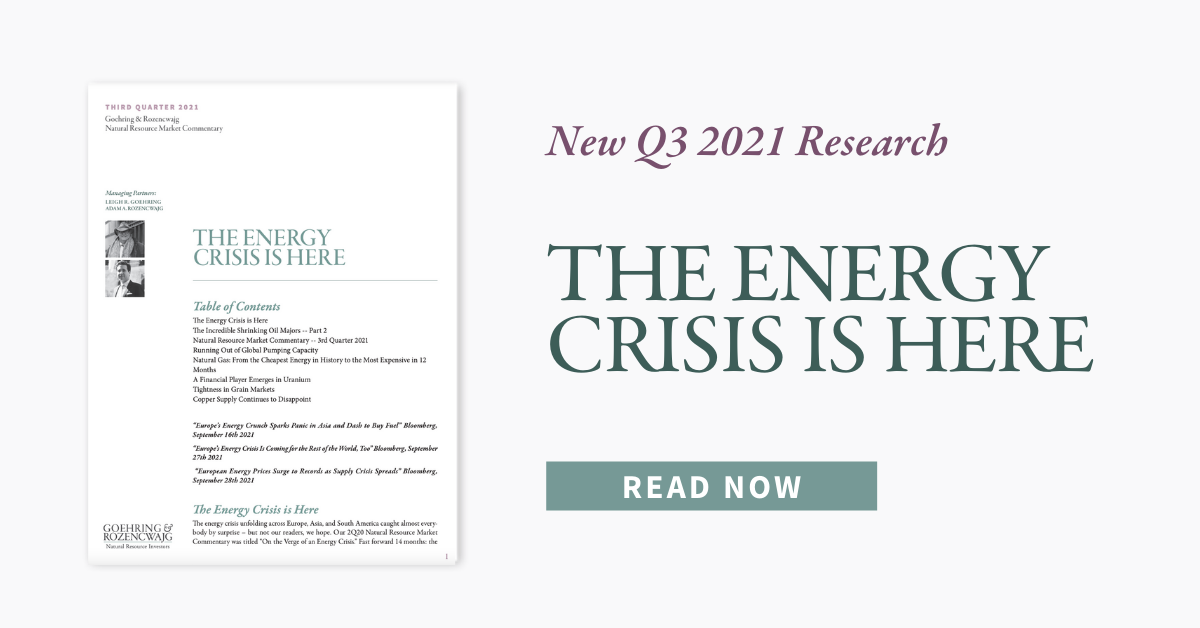