Oil production growth outside of OPEC+ and the US shales has been extremely difficult to achieve — even before the recent ESG pressures. Over the last 20 years, oil supermajors Exxon, Chevron, Royal Dutch Shell and Total have found it challenging to maintain their reserve base and production level. Even though upstream capital spending has surged, production and reserves have persistently declined. As ESG pressures constrain upstream spending, both oil reserves and production at these four companies will likely enter severe declines. Because of the tremendous corporate dislocation created by the 2010 Macondo oil spill, we have left BP out of this study.

Since 2000, every oil supermajor has targeted 5% production growth. Not only were these growth projections far too ambitious, two of the four supermajors are now actually smaller than they were 20 years ago. Exxon’s upstream production is down 12% while Royal Dutch Shell is down 9%. Only Total and Chevron have distinguished themselves by showing any annual production growth at all — 1.7% and 0.6% CAGR respectively since 2020. Proved oil and gas reserves paint the same picture. Exxon’s reserves are 27% lower while Royal Dutch Shell’s are 56% lower and Chevron’s are 3% lower. Only Total has grown at all over the last 20 years: its proved oil and gas reserves are 14% greater than in 2000. 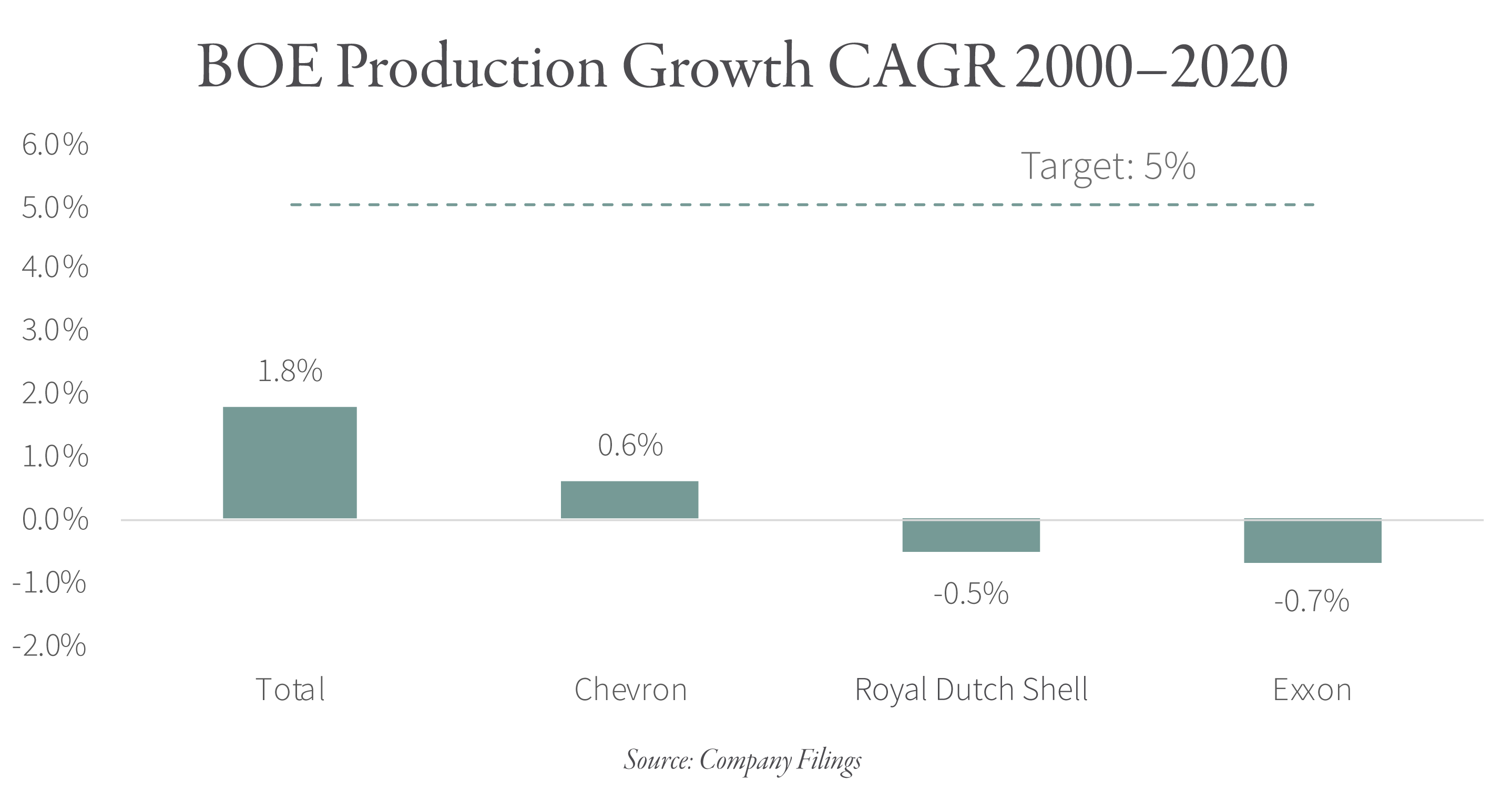 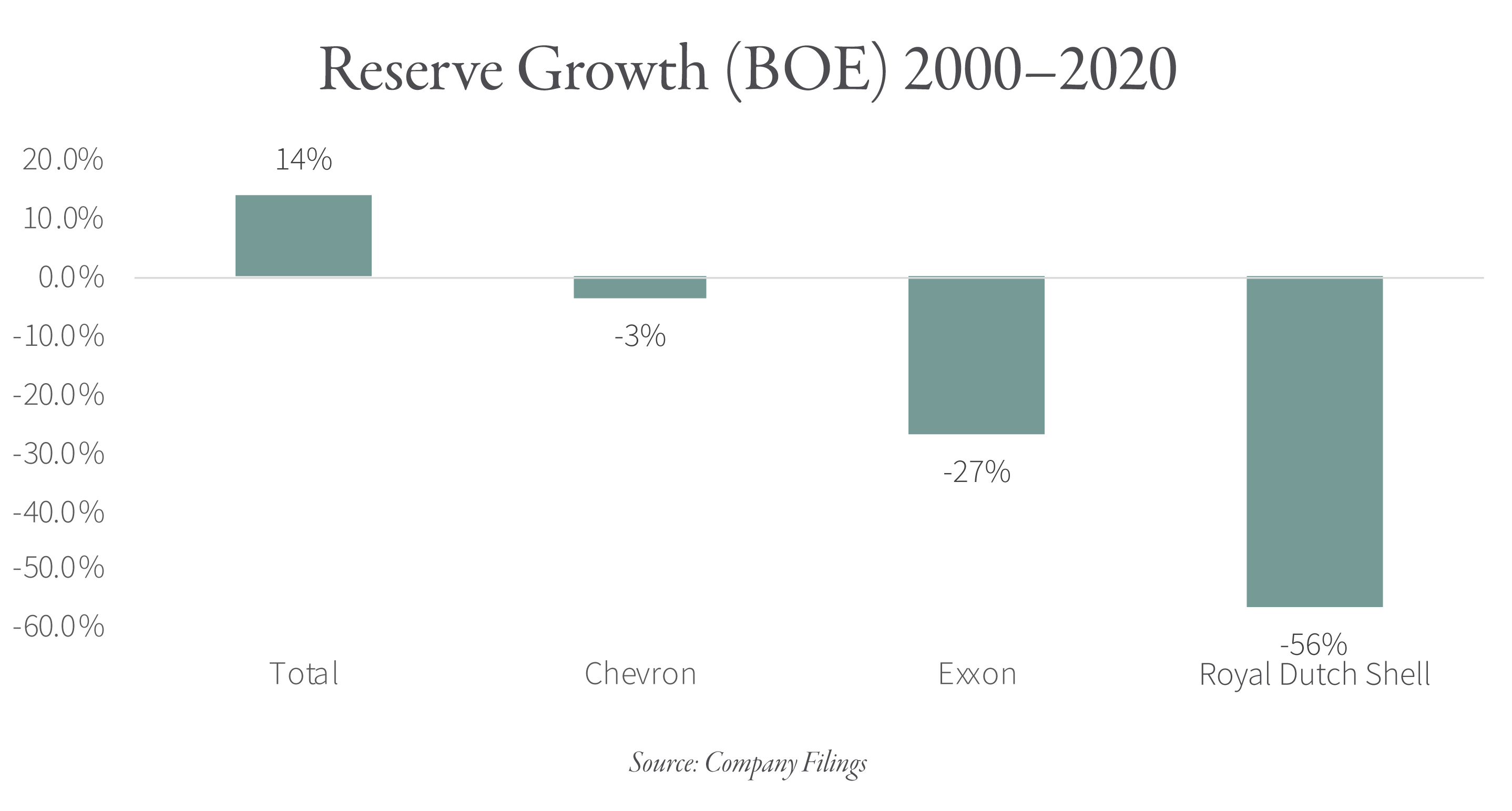 Things look significantly worse if you focus only on crude oil. While Exxon’s crude oil production has declined by 8% over the last 20 years (in line with gas production), Royal Dutch Shell’s crude production has collapsed by 20% while Chevron’s has fallen by 7%. While Total is once again the only company to show any growth, it has been modest: oil production is up 0.8% CAGR over the last 20 years. Proved oil reserves tell a similar story. Exxon’s proved oil reserves are down 26% while Royal Dutch Shell’s have collapsed by 57% and Chevron’s have fallen 29%. Even Total’s proved oil reserves have contracted by 16% since 2000. 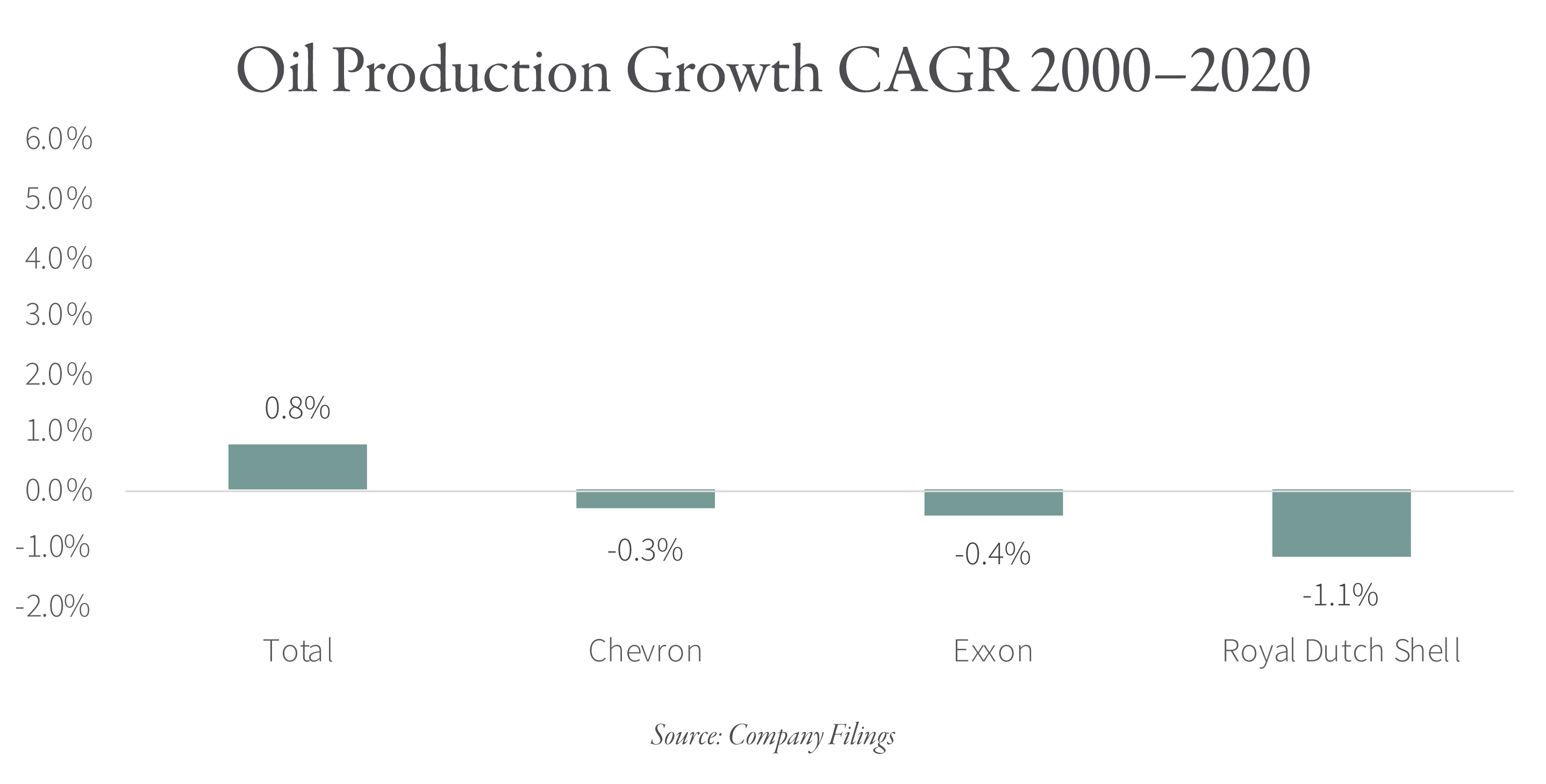 Reserves have fallen faster than production, causing the reserve-to-production ratio (R/P) to decline. Exxon’s R/P for total proved reserves fell from 10.1x in 2000 to 8.4x by 2020 while Royal Dutch Shell’s ratio fell from 14.6x to 7.4x and Chevron’s fell from 11.9x to 9.9x. Even Total was unable to halt the decline of its R/P ratio. Despite reserves growing, production grew more causing their total proved reserve R/P ratio to fall from 13.8x in 2000 to 11.1x by 2020.

Once again, focusing only on oil is even worse. While all four supermajors saw their total proved R/P ratios fall by 26% on average, their oil-only proved R/P ratios fell by 30%. Of the four companies, only Exxon’s proved oil R/P ratio remained above 10 in 2020. 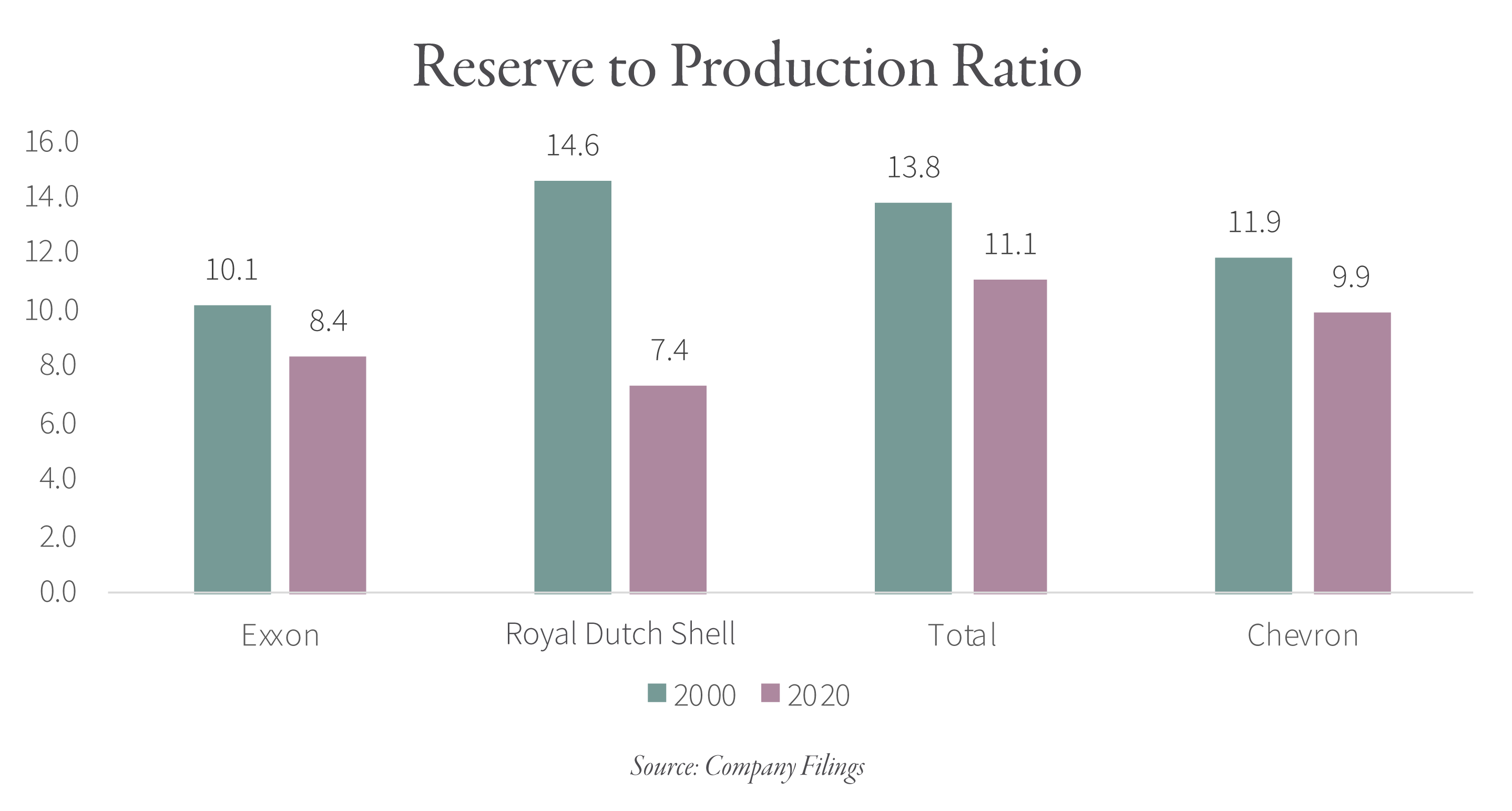 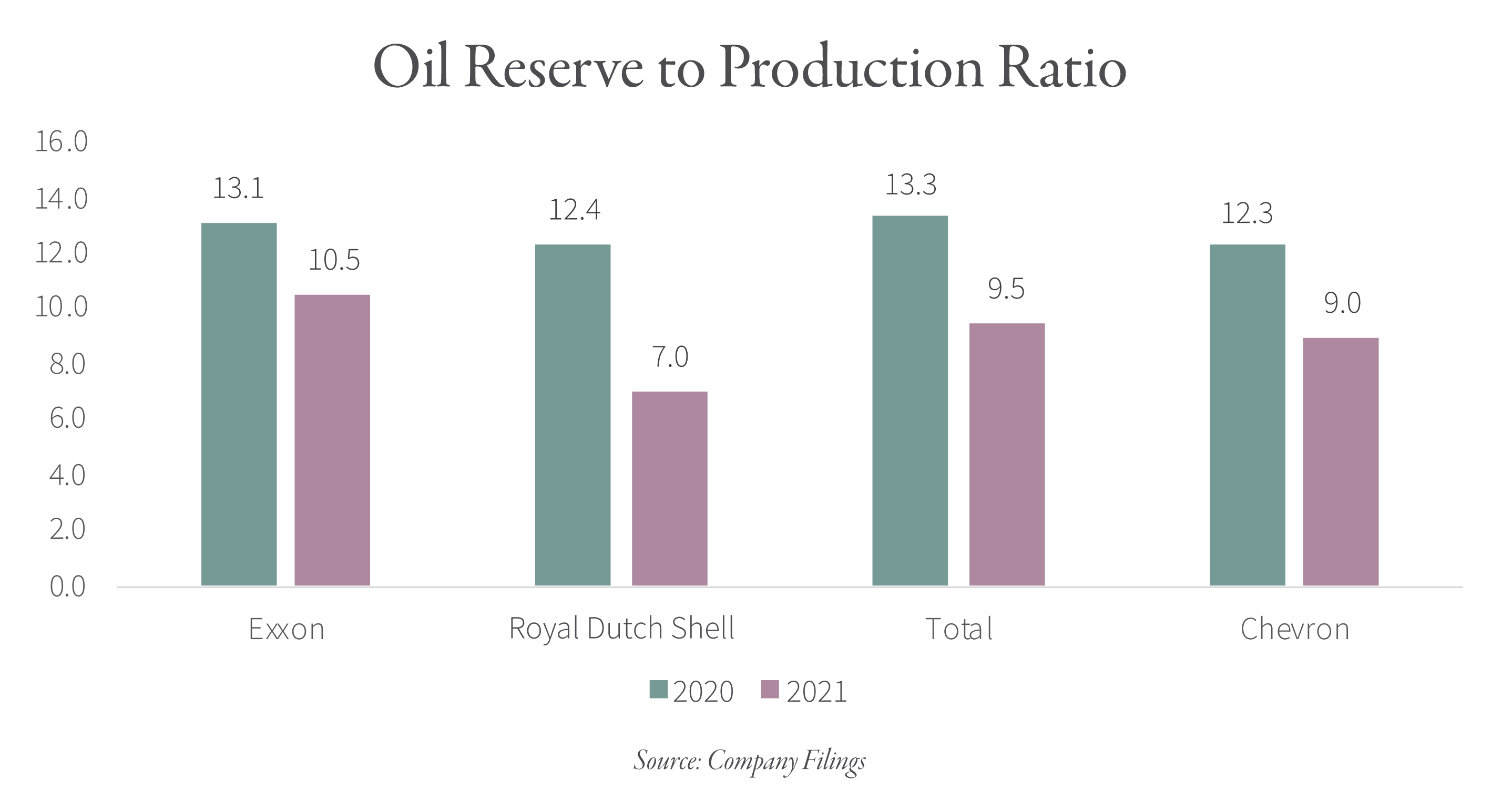 While these upstream metrics alone point to a challenging future for the supermajors, when you factor in the massive capital spending that took place over the last decade, the true severity of the situation becomes clear.

Between 2000 and 2010, the four supermajors spent $615 bn on upstream capital expenditures. Over the same period, they produced 50.3 bn barrels of oil equivalent (boe) and found 41.1 bn boe of new reserves, resulting in a reserve replacement ratio of 86% (not very good) at an average finding and development cost of $14.30 per boe.

Between 2010 and 2020, upstream capital expenditures surged to $1.15 tr. Over the same time, the companies produced 50.6 bn boe and found 43.3 bn boe of new reserves — very much in line with the decade prior. Even though upstream capital spending nearly doubled, the companies were still unable to replace production with new reserves. In fact, reserve replacement was unchanged at 85% despite the increase in spending. As a result, the cost to find and develop a new barrel of reserve nearly doubled from $14.30 per boe to $26.40.

These numbers highlight the challenges facing the supermajors. With the addition of ESG pressures, the future for these companies has gone from challenged to incredibly bleak.

Intrigued? To read more on this subject, we encourage you to download the full commentary, available below.