Update on US Shale Oil Production and Rig Count

2021 shale production has held up better than we expected. At the end of last year, we predicted shale production would experience sustained sequential declines unless activity increased dramatically. Since then, shale production has largely been flat, continuing a trend that began last August. While the shales have not been able to grow, they have been able to arrest their declines better than we anticipated. Shale’s resilience is explained entirely by increased activity. As oil prices have moved sharply higher, shale producers have increased their completion levels, mostly in the Permian. Monthly shale completions increased from 600 at the end of 2020 to nearly 818 by June 2021, an increase of 35%. Adjusting our neural network for the increased completions explains all the discrepancy.

The completions came mostly from so-called DUCs or wells that were drilled but uncompleted. During last summer’s dislocation, companies chose to continue drilling when contractually obligated but opted to defer completing wells to reduce capital expenditures. As the crisis passed and oil prices moved higher, the companies rushed to bring the backlog online. The DUC inventory fell by 1,500 wells or 20% over the first half of the year to its lowest level since 2018.

While DUC activity rebounded, drilling activity has been much slower to respond. As you can see, there is a very tight relationship between oil prices and the rig count. Given the recent rally in crude, the rig count would normally have increased to between 800 and 1,000 operating rigs. Instead, the rig count remains below 400 — a level more strongly associated with $30 oil than $75. 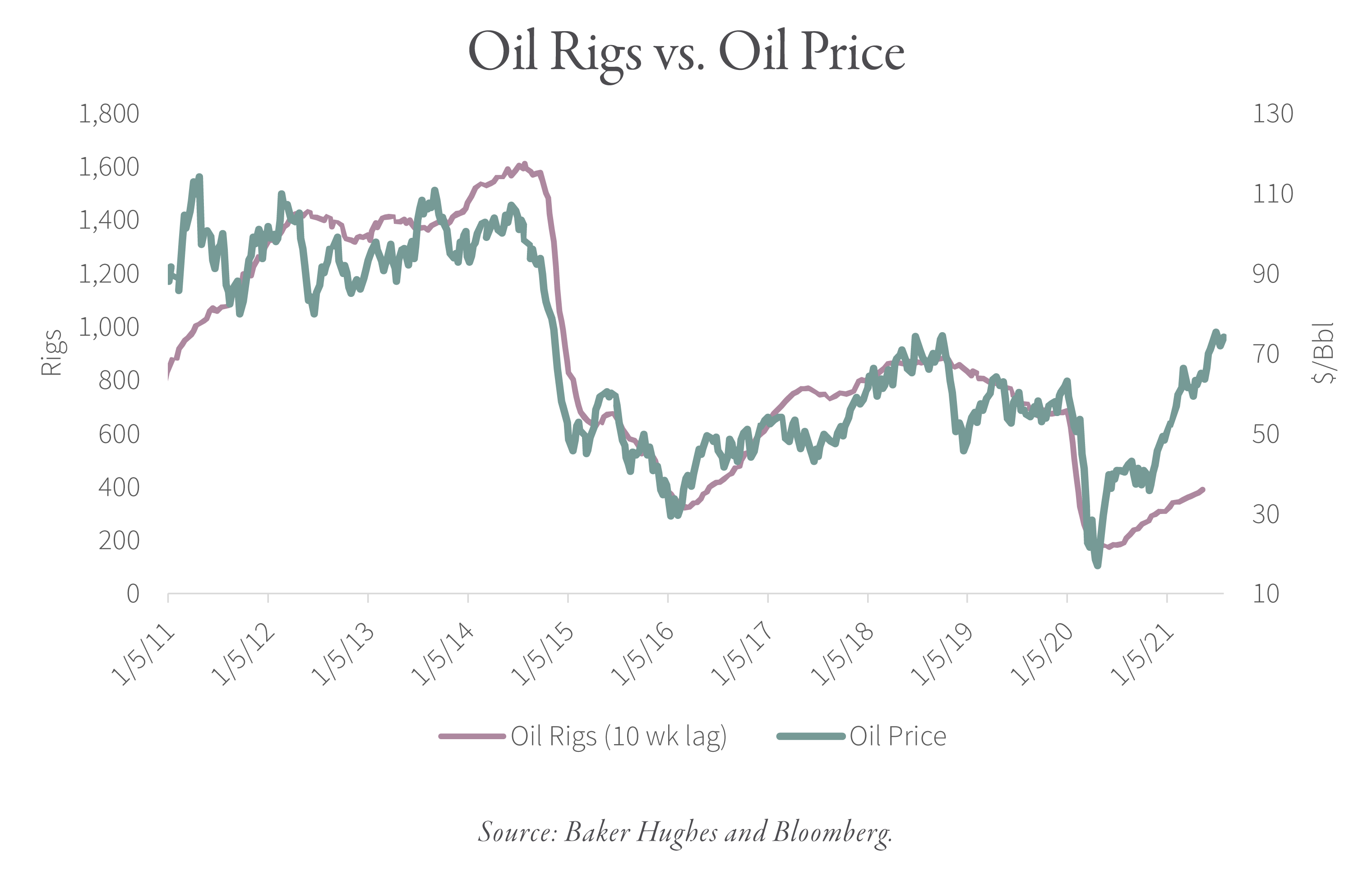 We believe companies have been slow to put rigs back to work because they lack high quality Tier 1 drilling inventory. As we have discussed in these letters, our neural network tells us the E&P companies have been high grading their inventory for years and have now largely developed their best areas. Whereas in previous cycles, the companies would have had enough economic drilling opportunities at today’s oil price to sustain an 800 rig count, today it is impossible to sustain half that activity. If we are correct, then production risks falling again once the DUC inventory normalizes.

As we mentioned, when you forecast the future, you are bound to get some things right and other things wrong. High prices have encouraged companies to complete their DUC inventory and in turn that has allowed shale production to arrest its declines better than we originally anticipated. However, the lack of rebound in the rig count is certainly telling. Moreover, it is worth noting that even with the recent increase in activity, every basin other than the Permian is now in sustained sequential decline — something we predicted last year.

We continue to believe the best days of the shales are now behind them. There will always be a certain degree of volatility in the monthly numbers, however, we do not expect production to ever grow again the way it has in the past. The only material source of non-OPEC growth over the past decade is likely gone.