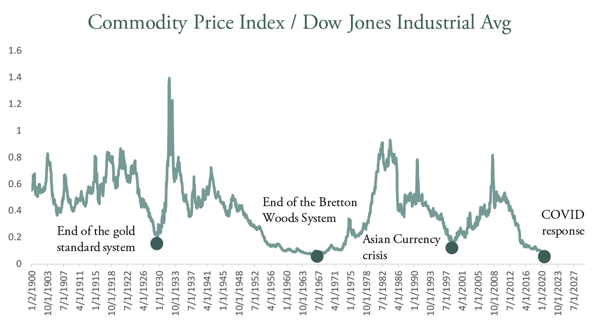 It is a strange time to talk about inflation given the impacts of the COVID-19 pandemic. Most raw material prices have fallen dramatically while unemployment claims have already broken records – neither of which suggests rising price levels. However, global governments have responded with trillions of dollars in liquidity and stimulus to help mitigate the virus’ impacts.  As the impact of the virus eventually passes, the monetary and fiscal measures put in place today will sow the seeds of next decade’s inflation.

As recently as 2008 the Federal Reserve’s balance sheet stood at less than $900 bn. Following the failure of Lehman Brothers it more than doubled to $2.2 tr and five years later it had doubled again to $4.4 tr. The balance sheet then proceeded to slowly fall before bottoming at $3.8 tr last fall. In September, the Fed responded to tightness in the repo market and by February the balance was back up over $4 tr. As of last Friday this level had already surged to $5.25 tr – before any material economic relief had even been implemented.

Then the CARES Act was approved.

The legislation calls for $2 tr of economic relief in the form of direct payments to individuals, tax cuts and grants to businesses, tax deferral and the funding of state spending. However, the most impactful measure by far is the $500 bn in business loans. The federal government will use this funding to capitalize a special purpose vehicle that will in turn lever itself 10:1 via the Federal Reserve. The net result is a $5 tr injection of liquidity into the economy on top of the $2 tr of additional fiscal relief. These actions could take the Federal Reserve’s balance sheet from $5.25 tr today to over $11 tr in only a few months. In 2007, the US was able to run a $19 tr economy with a Federal Reserve balance sheet of $850 bn. Thirteen years later, the US will likely run a $22 tr economy with a balance sheet of $11 tr.

Moreover, there is already talk of a new relief bill less than one week after the last one was passed. The Fed meanwhile has embarked on an “unlimited” quantitative easing program. Recent actions have dramatically blurred the lines between monetary and fiscal policy: the legislation’s fiscal stimulus is being directly augmented by monetary policy with the help of Federal Reserve leverage. The concept of Modern Monetary Theory (MMT) has effectively gone from a theoretical debate to being put into practice. The once sacred separation between fiscal and monetary policy is now largely a relic of the past.

While in some measures we have been in unchartered territory since the GFC, the events of the past week are on another scale entirely. Could these moves finally end the US Treasury bull market, now in its 40th year? What other knock on effects could result?

The obvious effect would be a shift from the deflationary psychology that has gripped markets over the past decade to a new period of inflation. Very few investors are positioned for such a move. The other effect could be a rerating of real asset prices generally and particularly commodities. We have shown the chart above several times over the last four years. It shows the price of commodities relative to the price of financial assets. After the recent oil price collapse, commodity prices are now basically as radically undervalued as they were at their lows in 1969 (immediately preceding the best decade for commodity prices ever). The other major periods of commodity price undervaluation were 1929 and 1999 – again both good times to establish investments in resource sectors. In our letters, we explored the conditions leading up to the extreme valuations in 1929, 1969 and 1999 and noted their similarities with today.

We also analyzed the catalyst that started the bull market in resources following all three lows. We concluded that in each case, a bull market in real assets followed a major shift in global monetary policy. For example, in the late 1920’s it was the realization that Britain would have to abandon its attempt to go back on the pre-war gold standard (effectively ending a monetary system that had been in place since 1819). In 1969, it was the first steps in loosening the Bretton Woods exchange standard, ultimately culminating in the “Nixon Shock” two years later. In 1999, it was the move by several Asian economies to intervene in keeping their currencies depressed to spur growth following the Asian currency crisis of 1997. In retrospect, the 2020 rerating of real assets will have been caused by the unprecedented actions being taken today by the global Central Banks.

Investors today are concerned about near-term oil surpluses due to COVID-related demand destruction as well as OPEC+ price wars. In our recent webinar we discussed these forces in great detail and we invite you all to listen to the replay. While the near-term market is certainly challenged, longer-term issues will surround the huge shale collapse that is now taking place. It will be impossible to restart this growth once oil prices recover, because the fields are simply too mature this time. At the same time, there are talks that upwards of 10 mm b/d could be shut-in permanently from old and uneconomic wells globally. These volumes will never come back and will only make the future price action more severe. To put this in perspective, 10 mm b/d represents nearly a decade of global oil demand growth.

The recent events have certainly been dramatic for every part of the economy. However, while the COVID-virus will eventually abate, the issues we have laid out here will be with us for the next decade or longer. Many of these trends tend to move in large and long cycles and most often the catalyst for change is an exogenous shock.

We have just had that shock. Are you and your clients prepared? 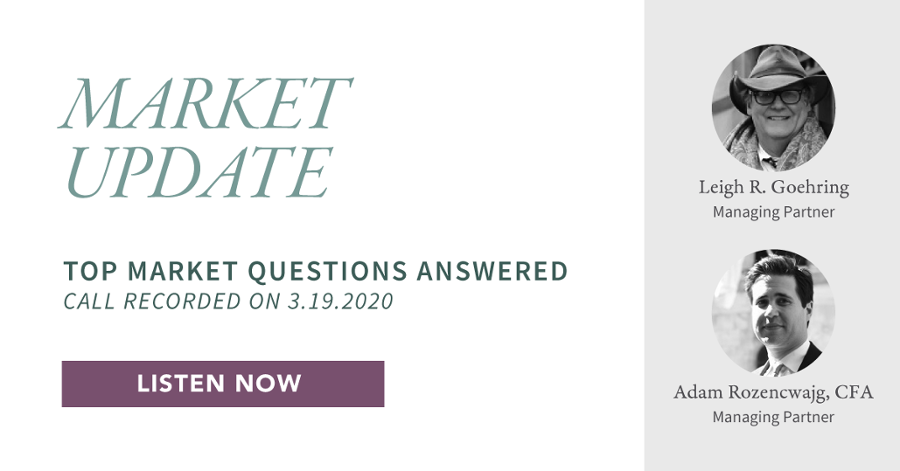