Why Gold Prices Could Go Higher Than You Think

We believe gold today is undervalued and that a huge gold bull market could lie in front of us.

As we wrote extensively first in the late 1990s and again today, we believe that gold has become radically undervalued. Although many investors believe that gold can’t be valued, we take a different view. We believe gold is like any other asset class. Asset classes (bonds, stocks, emerging markets, commodities or gold) become popular, sustain large price advances and become overvalued. At that point, they represent poor investments. Conversely, these same asset classes will often undergo long periods of investor disinterest, experience sustained and drawn-out price declines, and consequently will become undervalued. At that point, they often represent excellent investment opportunities.

We agree with consensus opinion regarding gold on a long-term basis: gold represents a poor investment. As its critics correctly point out, it pays no dividends or interest, and it is expensive to store. However, if investors can properly identify those periods when gold is severely undervalued, then gold (as an asset class), can produce superior (and indeed often spectacular) uncorrelated returns, just like it did back in 1929, 1970 and 1999.

Let’s look at how gold has historically been priced relative to financial assets. The popularity of financial assets (especially the stock market) and gold tend to be inversely correlated and by measuring the divergence between stock prices and gold we can see where we stand in the investment cycle. One of our favorite ratios is the price level of the Dow Jones Industrial Average to gold’s price. As you can see from the chart below, there have been three distinct periods of extreme overvaluation of financial assets versus gold in the last 100 years: 1929, the late 1960s/early 1970s, and 1999/early 2000s. 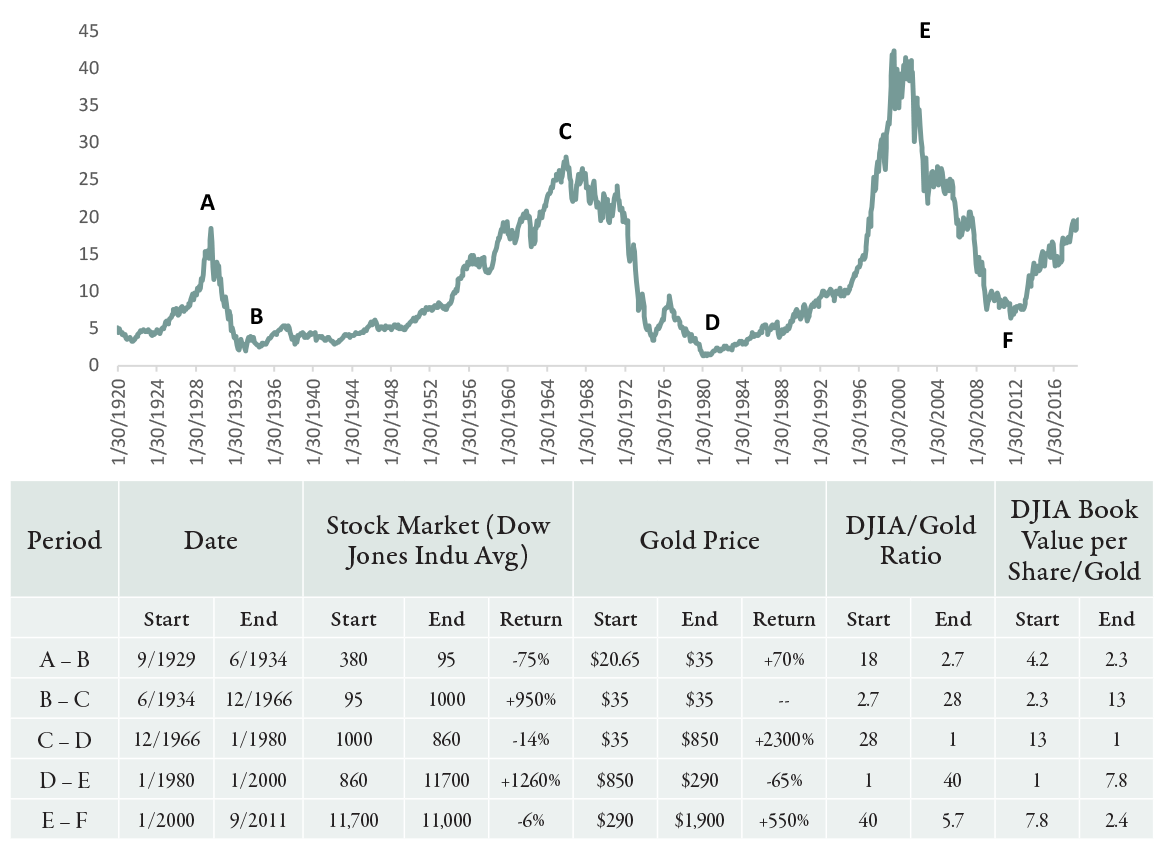 Today, with the stock market having more than doubled since 2011 and gold prices today 35% below their 2011 peak, the Dow to gold ratio stands at 20. Although we have not reached the valuation extremes of 1970 or 1999, we are trading above the ratio of 18 achieved back in 1929, which was the first distinct period of extreme overvaluation during this 100-year span. (For more information on this and other valuation metrics such as the relationship between the size of the US Federal Reserve’s balance sheet and the dollar value of the Treasury’s gold holdings, we encourage you to read our full Q2 2018 commentary.)

We believe the next leg in the great bull market could begin to take shape in the not too distant future. It has been over 38 years since we last saw speculative fevers grip global precious metal markets. We would not be surprised if the next upward move in gold ushers in a return of extreme speculative activity, something that has been completely absent from the gold bull market that started back in 2000. As the famed market commentator Richard Russell used to repeatedly tell investors: “There is no fever like gold fever.”