Why Nuclear Power is a Solution to Our Energy Needs

The pendulum continued to swing in favor of nuclear power during Q2. The Russian invasion of Ukraine has put national energy security front and center while the limitations of wind and solar (namely their intermittency) are becoming acutely appreciated. We have long argued that nuclear power remains the only source of high EROEI carbon- free baseload power. Policy makers are beginning to take note.

The European Union ratified its Green Taxonomy, officially labeling nuclear power as part of a carbon-free future. The Taxonomy was approved on a preliminary basis last July but subject to a final ratification. The proposal was extremely controversial with many countries, led by Germany, advocating against the inclusion of nuclear power in a green future. The ongoing energy crisis throughout Europe seems to have outweighed any opposition.

France, the UK, the Netherlands, and even Japan are embarking on new nuclear buildouts or extensions of existing facilities. Even Germany, which has spent the past decade dismantling its nuclear power capacity, is talking about building new reactors.

So-called Gen IV reactors (often referred to as “small modular reactors”) continue to gain traction. NuScale Power, a company pursing a new reactor design, pursued a public listing as part of a de-SPAC process and sports a valuation more than $3 bn. We have started an extensive due diligence process on several new Gen IV reactor designs and are intrigued by some of them. We believe some of the new designs could help to greatly reduce costs, improve safety, and lower the volume of radioactive waste by nearly an order of magnitude – the three main pushbacks against nuclear power.

As we go to print, the Inflation Reduction Act of 2022 has just been signed into Law. Included in the Act is a little mentioned but highly impactful appropriation for existing nuclear power plants. The Act calls for $30 bn in credits for current operations by providing for a “Zero Emission Nuclear Power Production Credit.” According to Bloomberg, analysts believe this incentive could help keep nearly 40% of the current US nuclear power capacity operational going forward.

Furthermore, the bill calls for an advanced reactor production tax credit and investment tax credit which will directly benefit the development of new Gen IV reactors. Lastly, $700 bn has been provided for the support of high-assay low-enriched uranium production (HALEU). Most Gen IV reactor designs utilize HALEU which is simply uranium that has been enriched to 17-20% instead of the normal 5% for current nuclear reactors (for context, weapon grade uranium has been enriched to 90%). There has been concern over the availability of domestically produced HALEU, particularly since the only source of the material presently comes from Russia.

Public sentiment is clearly shifting in favor of nuclear energy. We continue to believe that nuclear energy is the ideal solution to our energy needs – it is both extremely efficient, with a record-setting EROEI of 100:1 and produces no carbon. We commend policy makers for finally realizing these benefits. 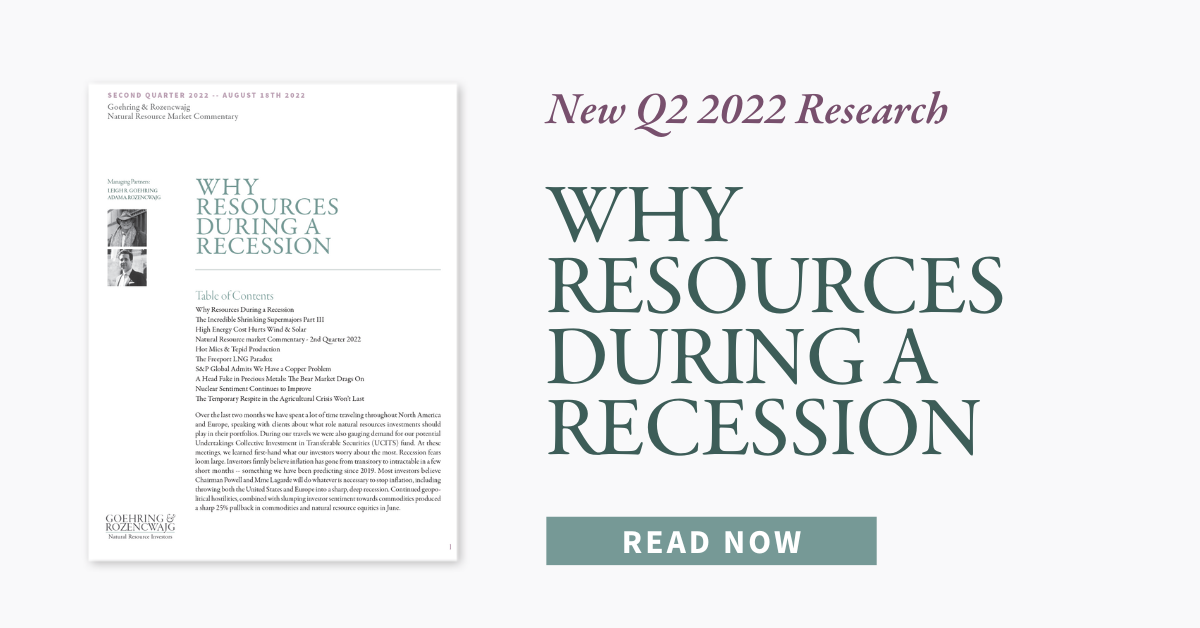