Global grain markets continue to be on a knife’s edge. Because of extremely strong grain demand, any drop in record global grain yields will have huge impacts on global grain inventories, which are already drawing relative to historical seasonal levels. While today’s headlines are dominated by trade war rhetoric, these issues will ultimately have little lasting impact on the bullish longer-term emerging-market protein demand trends.

Despite grain prices falling dramatically in 2018 due to the U.S. trade war with China, we believe current weakness presents a significant buying opportunity. 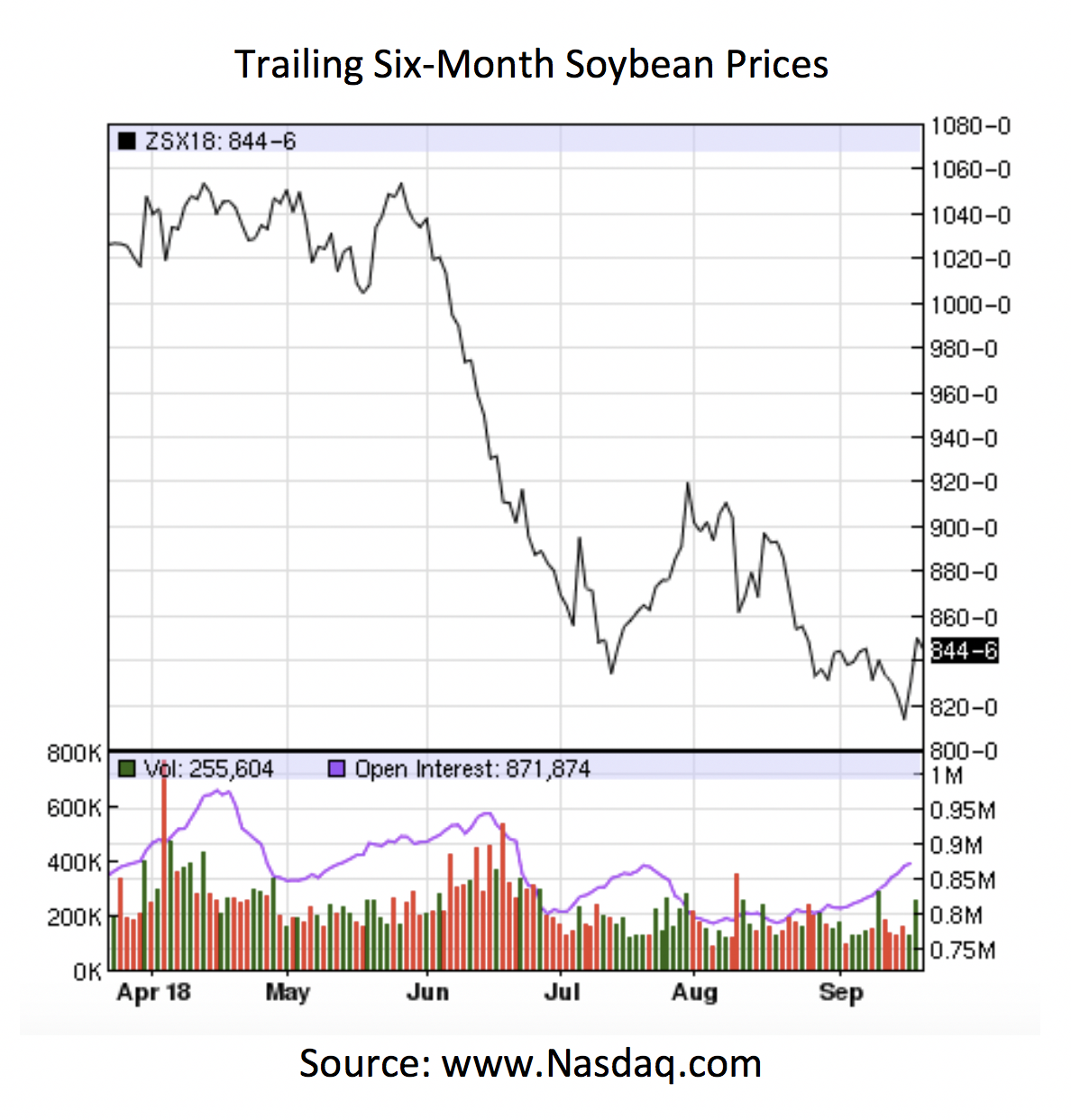 There are several reasons to be bullish. First, as discussed in an August blog, global grain demand, led by soybeans, is surging. Global soybean demand is growing at over 5% annual rates. Global corn demand and US corn exports also continue to set records. Over the last four years, China corn demand has grown by over 5% per year and is now estimated to have reached 249mm tonnes, far outstripping estimated supply of 220mm tonnes. China is already rapidly drawing down its corn stocks which are estimated to be somewhere between 80 and 140mm tonnes. Adding to future corn demand, all gasoline sold in China must contain 10% ethanol starting in 2020. An “E-10” standard will add an additional 30mm tonnes of Chinese demand. Given the large drawdowns now taking place in Chinese corn inventories, we believe China will be forced back into becoming a large corn importer in the next several years.

Second, current supply-demand trends for all grains are dependent on extremely high yield assumptions. For example, US corn yield shave exceeded historical trendlines four years in a row, something very seldom seen. For the 2018 season, the USDA again expects US corn yields to hit an all-time high of 177 bushels per acre, a full 5 bushels above the long-term historical trend lines of 172 bushels per acre. If yields were to drop to just historical trend lines, we calculate ending corn stocks would swing from today’s levels to dangerously low levels in just six months. The same situation exists in today’s soybean markets. Although the most recent WASDE report increased the US soybean carryout to 580mm bushels (up from the 465mm bushel carryout last year), the same yield math applies to soybeans as well.

Just like corn, soybean yields have significantly exceeded trend line growth over the last four planting seasons—a trend never before observed in the last 60 years. The USDA is assuming a 2018 US soybean yield of 49.1 bushels per acre, a full 2.1 bushels higher than historical trend line. And just like corn, if soybean yields were to fall just back to the 47 bushel trend line yield, we compute the US soybean carryout would swing from record highs to record lows in incredibly short order. Although estimates for both corn and soybean carryouts are at high levels today, our modeling tells us that any drop-in yields could have huge impacts on carryout inventory levels and price.

We also believe the world’s unprecedented streak in global growing conditions is coming to a close. Over the last four years, the world has experienced excellent back-to-back global growing conditions which significantly helped the surge in crop yields just discussed. However, various meteorological cycles (primarily the eleven-year solar cycle) are now ending and, if history is a guide, less-than-ideal global weather conditions could emerge in one (or several) grain growing regions in the next several years. For example, drought conditions are at present gripping Europe. In July 2018, Bloomberg News ran the headline: “Europe’s Blistering Heatwave is Ruining This Year’s Harvest.” The Black Sea in the FSU (a huge wheat producing region) is also experiencing severe drought conditions. Further, it will be imperative to monitor growing conditions in Brazil. Wide-spread drought conditions are expanding there as well with no relief in sight going into the upcoming planting season. A 2018-2019 drought in Brazil could put significant upward pressure on grain prices in the next several months.

To read more of our Q2 2018 letter, please download it here.